These Kind Bees Unite to Save Their Friend’s Life 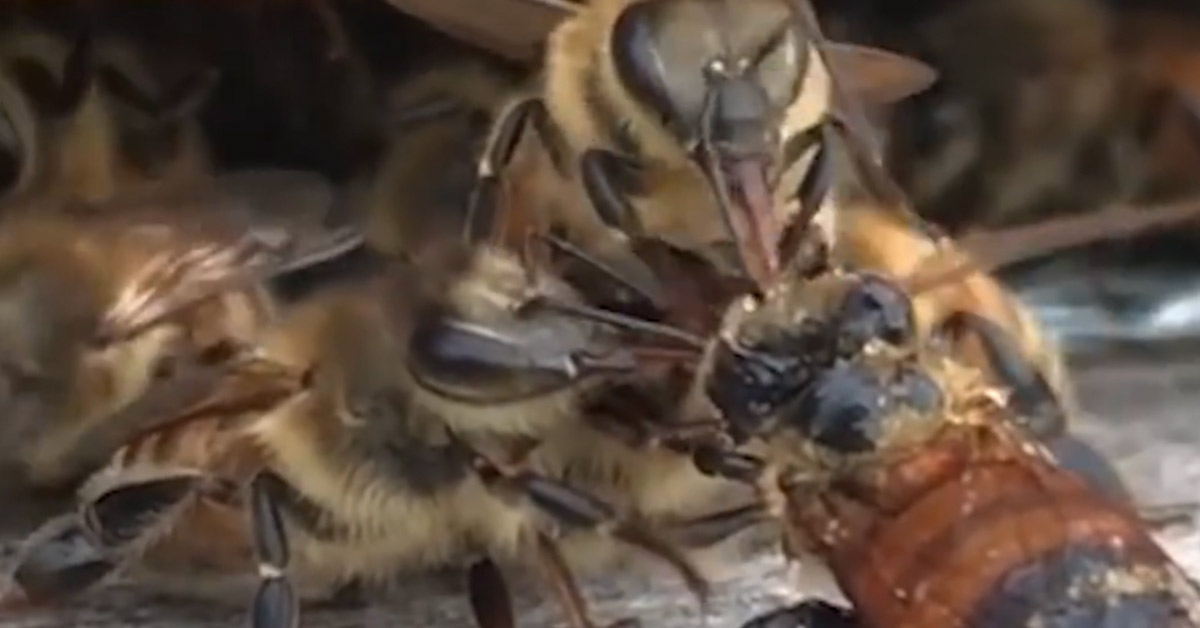 Bees are incredible little creatures. Their level of organization is impressive and ought to be emulated by everyone. They are also very hardworking with an almost endless supply of energy. Bees are also quite intelligent. They are not born with the ability to make honey; nevertheless, they’re able to learn it from being in the hive. [1] Studies have shown just how sophisticated a bee’s brain is and that is a truly fascinating topic. Regardless of their intellectual brilliance, this right here is a story of how big these tiny creatures’ hearts are.

A moment of kindness between some bees in a hive was captured by a beekeeper. An incident that would have become tragic turned out to be inspiring instead. This was the case of a bee that fell into a honey extractor and was drenched in honey. The incident happened in a small farm located within a blueberry field in South West Michigan.

The beekeeper saw her and moved her to the front of the beehive. Once the other bees realized that she was struggling, they rushed to her aid and began to clean the honey off her. Several bees were involved in the rescue mission, yet it took them about half an hour before they could clean off all the honey. Nonetheless, when they were done, the wings were squeaky clean, and she was able to fly. [2]

The beekeeper shared the video online and it was posted by ‘ViralHog’ on YouTube. The video went viral with over 73,000 views, and there were so many comments about how incredible the scene was.

Bees are even more loyal to the Queen

Their loyalty to the queen is simply amazing.

In 2016, Carol Howarth parked her car outside a shopping mall in Haverfordwest, Wales. A while later, a swarm of about 20,000 bees gathered around her car. A team of beekeepers were called to handle the situation appropriately. They did, and as the bees left the car, everyone thought the situation had been resolved. Howarth drove off, but she was followed by the bees. She called the beekeepers back, and they realized that the queen was stuck in her car, and the other bees were trying to rescue her.

Eventually, the queen and her subjects were safely reunited. According to Roger Burns of Pembrokeshire Beekeepers, it was the strangest ‘bee thing’ he had witnessed in his 30 years of beekeeping. He also said, “It is natural for them to follow the queen but it is a strange thing to see and quite surprising to have a car followed for two days. It was quite amusing.” [3]

Research has shown that bees can have positive feelings

Scientists from Queen Mary University of London did some work on bees, and found out that bees can experience “something akin to a rush of optimism.”

Clint J. Perry, cognitive neuroethologist at the university, said, “We can’t say they experience life in the same way that we do. But on a basic level, there’s no reason to believe they can’t feel something. It does feel like something to be a bee or an ant or what-have-you.” [4]

If they have these feelings of optimism, then it stands to reason that they can express other forms of emotion, such as the ones seen in the above stories. Also, several studies have shown that animals, in general, can ‘feel.’

These stories certainly challenge the wrong idea people have of animals when they think animals are emotionless creatures.

In July 2012, a group of scientists led by computational neuroscientist and neurophysiologist Dr. Philip Low gathered at The University of Cambridge to assess the conscious experience and similar attributes in humans and non-human animals. There, they publicly came to the consensus that humans and non-human animals both have awareness and experiences.

The Cambridge Declaration on Consciousness, as it was called, was signed at the Francis Crick Memorial Conference of Consciousness in Human and Non-Human Animals with Stephen Hawking in attendance. [5]

They stated that, “The absence of a neocortex does not appear to preclude an organism from experiencing affective states. Convergent evidence indicates that non-human animals have the neuroanatomical, neurochemical, and neurophysiological substrates of conscious states along with the capacity to exhibit intentional behaviors. Consequently, the weight of evidence indicates that humans are not unique in possessing the neurological substrates that generate consciousness. Nonhuman animals, including all mammals and birds, and many other creatures, including octopuses, also possess these neurological substrates.” [6]

Ultimately, these fascinating stories have changed the way we see animals. We must start to appreciate the intelligence and sentiments of these animals. Here’s hoping that more people accept that there’s much more to animals than they previously assumed, and that the way humans treat animals change for the better — for the sake of a more wholesome planet.