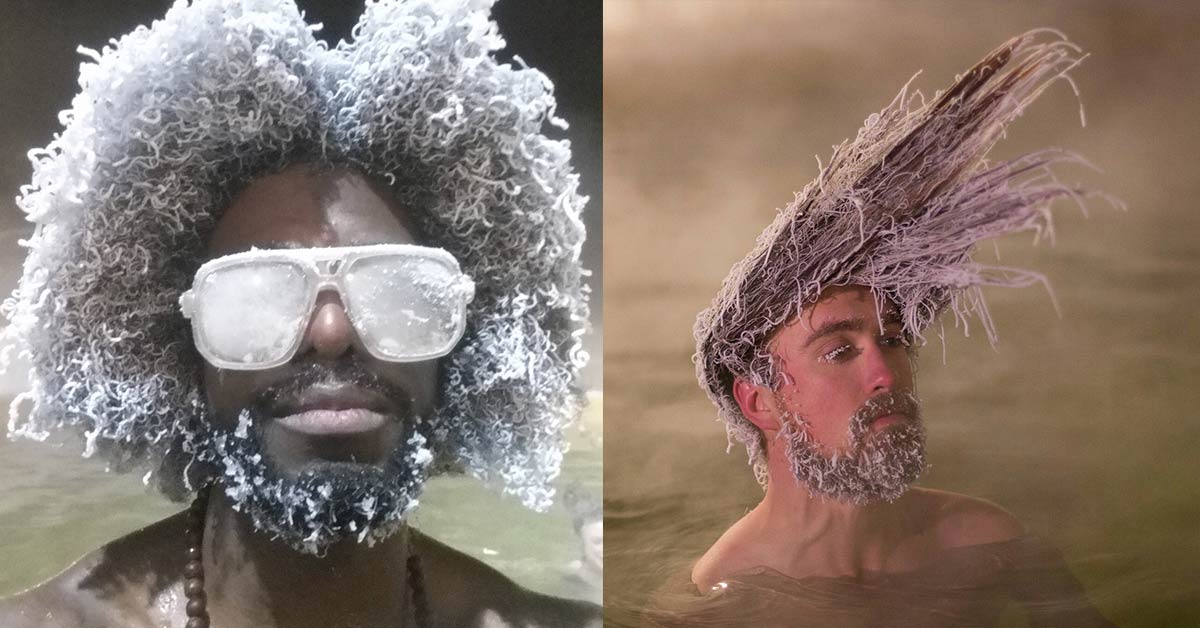 Extreme colds in America causes everyone to seek relief from it. Only the bravest and most desperate attempt to venture out in those conditions. However, in Canada, it seems people look forward to the winter so they can hold a weird contest.

Yup! You read that right. People in Yukon Territory, Canada, have found the craziest way to let their hair down, or up as the case may be. Every year, the International Hair Freezing Contest takes place at Takhini Hot Pools. There aren’t any fixed dates for the contest; it only happens on days when the temperature is so low that wet hair would freeze instantly. The temperature there is usually -20°C. But don’t worry, they don’t just stand in the cold with wet hair. The Takhini Hot Springs, which are between 36–42°C protect people from becoming dead frozen icicles. [1]

All you need to know about the contest

This crazy contest began in 2011. People would soak themselves in the hot springs to get some relief from the cold. A former manager saw an opportunity there and challenged them to style their hair. let it freeze, and take selfies. Employees would then select the craziest one as the winner.

It takes place during the Sourdough Rendezvous in February. All pictures are received and the top three are selected and announced in March. It happens yearly as long as the temperature is cold enough; although there have been years when it was too warm for the contest to take place. [2]

It’s not stopping any time soon

This is the ninth year of this frozen hair contest, and just like hair, it seems to be growing more and more. Andrew Umbrich, co-owner of Takhini Hot Pools said, “It was a pretty small affair up until 2015 [when we started getting some publicity]. Frozen hair was something that was occurring naturally when people would bathe in the hot springs during cold weather, so the manager at the time decided to make a competition out of it”. Social media has helped a lot in getting the word out. Umbrich says they get various visitors from all over the world. [3]

How much do people win in this contest?

The money probably doesn’t matter to the contestants but we’ll let you know anyway.

Here are a few photos from the contest

Most people also freeze their beards, eyelashes, and eyebrows — just like this guy. He does look like a weird plate of noodles, doesn’t he?

Look at the smile on their faces.

A helpful tip from the organizers is that if you lay down on the poolside, your hair will freeze in single, long strands which eventually stick straight up.

Who doesn’t want their hair to be like icicles?

“Last year, we had a lady who managed to stick her hair out horizontally on either side, with each side measuring over two feet. That was pretty impressive. Usually, people will stick their hair straight up or spike it out, or men will style their beards and chest hair. We’ve never seen so much hair stand so horizontally straight before. She won the ‘most creative’ category,” said Umbrich.

As a bonus, you could be lucky enough to see the Northern Lights while having a relaxing soak in the mineral-rich waters of the hot springs.

Once you’re done and your photo has been taken, all you need to do is dip your head back into the water and the ice melts away. This seems like such a cool thing to do. I guess the people who do it have something in common with Elsa — the cold never bothered them anyway.