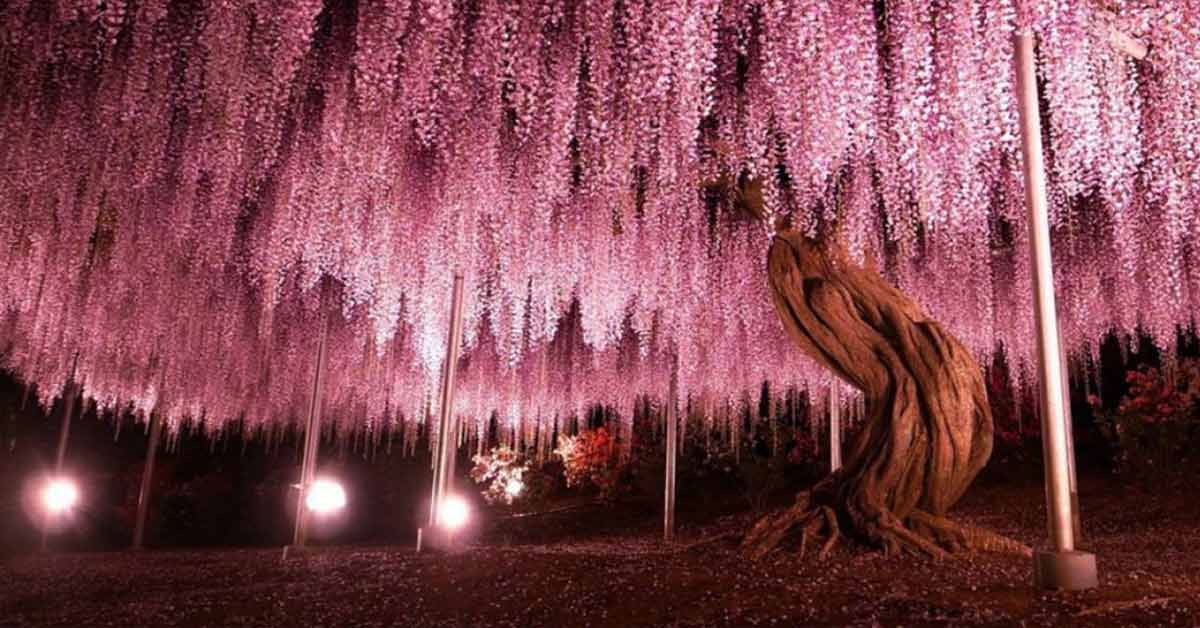 If you’re ever looking for a real-life depiction of “ageless beauty,” this Japanese wisteria might be all the wonders you’ll never need to see. One hundred and forty-nine years later and the climbing bines have continued to blossom every year from mid-April to mid-May, creating a scene so magically beautiful it could pass for an enchanted world. [1] It’s no wonder why it got featured in CNN’s “Dream Destinations 2014.” [2] Japan is home to a lot of beautiful and scenic locations that attract tourists from all over the world, but that year, the wisteria won the Ashikaga Flower Garden, the only Japanese spot on the list.

Stunning pink and purple blooms dangle from the aged vine trees and gently sway above people’s heads. Looking up, they appear to be colorful spears swiping across the sky. Wisteria is a genus of flowering plants made of woody climbing bines that are native to China, Korea, Japan, and the Eastern United States. Dating back to 1870, Ashikaga’s wisteria spreads out at approximately 1,990 square meters, covering about half an acre of the park’s grounds. However, at 4,000 square meters, the largest wisteria in the world is the massive vine in Sierra Madre, California, although it’s not as beautiful as Ashikaga’s.

Japan is globally known for landscapes deeply adorned with flowers, but these plants are a real showstopper. Wisteria plants can live as long as 1,200 years, therefore, all other factors being equal, Ashikaga’s has barely started its journey of life. The park usually holds a big event every year in mid-April to celebrate the arrival of the wisteria season, and they expect an annual average of 1.5 million visitors as they’ve recently recorded.

While the wisteria plants are the reason the park is so famous, there are other flowery delights to be enjoyed in the garden. From roses and hydrangeas in June and more roses and intoxicating herbs in autumn, there’s never a moment when the garden isn’t bursting alive with colors and heavenly scents. Even winter comes with its own share of the floral magic.

Ashikaga has a total of 11 wisteria hotspots that bloom in an array of four colors, pink, purple, white, and yellow.

In late April, the pink wisteria would often be nearing the end of their bloom, while the purple and white would be right at their peak. May arrives with the bloom of the stunning yellow wisteria.