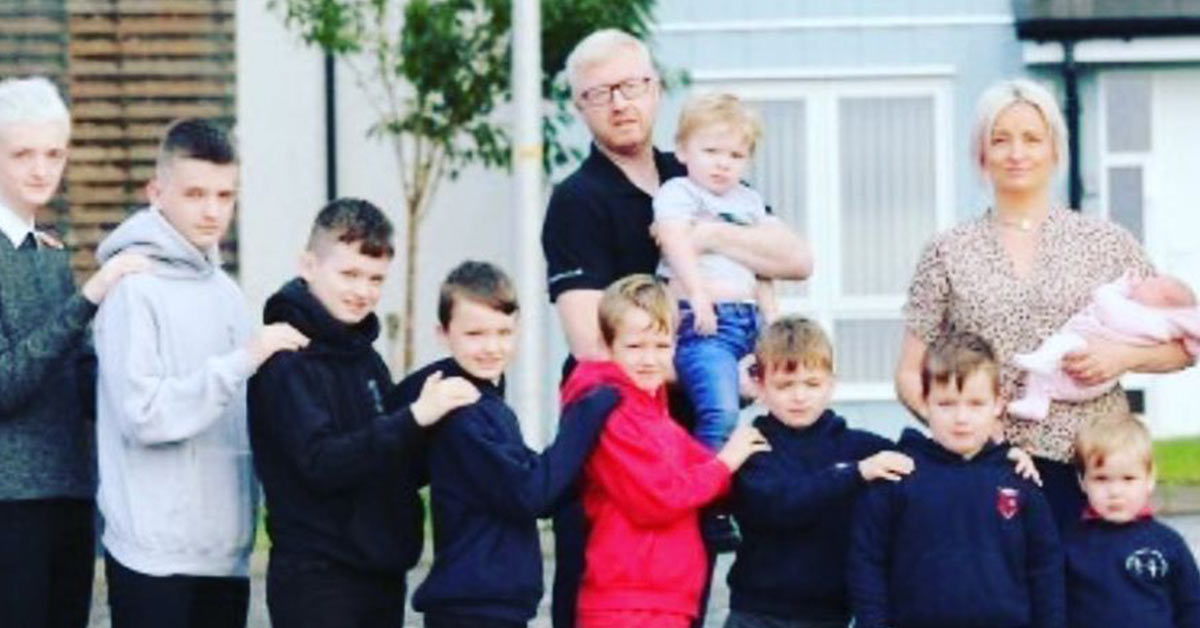 Although some experts claim that they can predict and potentially influence the sex of one’s child during conception, most parents choose to remain surprised. But that doesn’t mean that they stop trying for the gender they want.

The Y chromosome has always been a strong factor for the Bretts whose ten boys range in age from two to 17. This time the double X chromosomes kicked in to produce a bouncing baby girl.

After setting a record as the first mom in Britain to give birth to 10 boys in a row, Alexis Brett, a former nurse who retrained as a fitness instructor, had resigned herself to being the sole woman in an all-male household. However, fate has dealt the super happy mom with a whole new gender as she recently gave birth to her 11th child.

As you can expect, this brings much joy to the parents, who say this last pregnancy was an unplanned but welcome development. Alexis Brett suspected she was pregnant last Christmas Eve, and this was confirmed by a home pregnancy test. The parents assumed it would be yet another boy and were overjoyed when they found out they would have their first baby girl. In fact, they were so nervous to open the envelope at the gender reveal, so their son, Harrison, did it for them.

After welcoming her new arrival last month, the proud mom had this to say:

“We’re over the moon. I’d been expecting to hear we were having another boy. But when I found out it was a girl; my face was a picture. I was shocked, but delighted. Now she’s here with us; it’s a fantastic feeling.” [1]

After giving birth to her youngest son, Rothagaidh, two years ago, Alexis became the first woman in Britain to give birth to 10 boys in a row. The new addition means that the 39-year-old has spent more than eight years being pregnant during the last 18 years of her life and is now a mom to a pretty big family.

Alexis decided to name her baby girl Cameron, after actress Cameron Diaz, and the little princess has already begun to change the family dynamics quite a bit. Her ten older brothers are more well-behaved, attentive not to wake their little sister, and super protective of her in general.

The uniquely large family is used to people commenting, especially when she got pregnant again, and Alexis says not all the remarks they receive are very pleasant. “Some people think we must be on benefits but we’re not. David has a good job, which means we don’t even qualify for full child benefits.” [2]

The delighted mother adds that they are definitely done making more children now. “There’ll be no more. I said that last time but this time, I absolutely mean it. I love my family as it is now. I’d never planned to have a large family, but now I do; I love it.”

Being a mom can be hard, but it is also rewarding

Life is not easy being a mom to 11 kids as Alexis does 49 laundry loads a week, vacuums seven times a day, and plans to resume her part-time fitness instructor business in a few weeks. The family has a seven-seater people carrier and a five-seater Range Rover to drive the kids around, and they still have to take a double journey when they travel as a family.

Her husband, David, is a train driver and usually leaves the house around 5:30. He had been diagnosed with early-onset Parkinson’s, but his symptoms are minor and helped by medication. He is a hands-on dad and works alongside Alexis to care for their boys.

His early departure leaves Alexis a little quiet time before the kids wake up in the morning to enjoy a shower and a cup of coffee. When asked if she was hoping for a girl, she says she would have been happy if her 11th child had been a boy.

“We’re asked a lot if we had so many children because we were hoping for that elusive girl. I can honestly answer ‘no.’ Cameron wasn’t planned, but I was happy all the same,” she said. [3]

Nevertheless, Alexis, admits that she’s having lots of fun buying pink things for the first time.