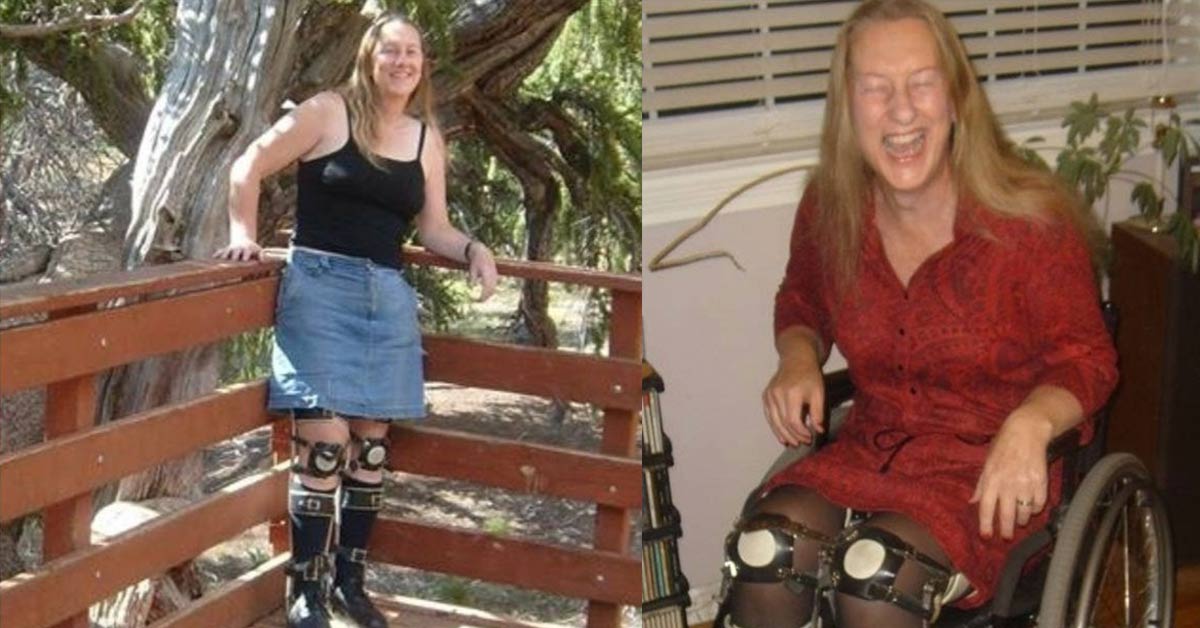 Among the most bizarre things you’ll hear today, there are people who quite literally want to live as disabled persons. And this is not just a crazy plan where they act disabled from 9–5 and then pick up their things and go.

Far from that, most of them — if they had their way — would amputate a limb, or sever a nerve to cause permanent damage. This insane condition is known as Body Integrity Identity Disorder (BIID).

BIID is quite possibly the weirdest and most confusing condition out there. It was described as being “characterized by the non-acceptance of one or more of one’s extremities, and the resulting desire for elective limb amputation or paralysis” in the 2012 issue of American Behavioral Scientist.

Most of us at some point complain about a certain part of our body being too fat or something, but we would never even consider surgery to change it. BIID goes way beyond ‘not liking’ the look of a limb.

BIID is very rare and is not even recognized officially by the psychiatric profession as a real condition. These people have been described as being “transabled.” Essentially, they feel as if they’re imposters in their own bodies.

According to Alexandre Baril, an Quebec academic, “We define transability as the desire or the need for a person identified as able-bodied by other people to transform his or her body to obtain a physical impairment. The person could want to become deaf, blind, amputee, paraplegic. It’s a really, really strong desire.” [1]

This condition manifests in the desire of the individual to become physically disabled, either as an amputee, blind, or even paraplegic. Most often, sufferers want an above-the-knee amputation of their left leg, but it could also be their arm or one of their senses, such as the need to be deaf or blind.

Doctor Michael First, a Manhattan-based Psychiatrist and Professor of Clinical Psychiatry at Columbia University described the people with BIID as having an “indescribable feeling that their body is somehow wrong.” [2]

What causes such an extreme condition?

You’d think this is an obvious psychological case, however, scientists have claimed that it is a neurological condition. Some researchers suggest early childhood trauma, obsessive-compulsive tendencies, as well as over-identifying with amputees by the person as contributing factors to the development of this condition.

The fact that BIID stems from a childhood exposure to amputees has been described as “absolute nonsense” by a neuroscientist at the University of California, Paul McGroech. McGroech and his team suspect a malfunction in the right parietal lobe of the brain as being responsible for BIID. In a bid to test this theory, they recruited four men with BIID via internet support groups. The team used magnetoencephalography (MGE), a non-invasive brain imaging technique used to measure the tiny magnetic fields created when neurons fire.

To give you a little perspective, when a normal person with no desire to amputate any of their limbs is touched on that limb, there would be registered activities in their right parietal lobe. However, this study by McGroech and his team showed that there was no such activity in the brain of BIID sufferers when the offending limb was stimulated. But there would be brain activity when other limbs are touched. [3]

This only goes to show how truly dead that limb is to them. The team reported, “Significantly reduced activation only in the [right parietal lobe] of the subjects’ affected legs when compared with both subjects’ unaffected legs and that of controls…[We] propose that inadequate activation of the [right parietal lobe] leads to the unnatural situation in which the sufferers can feel the limb in question being touched without it actually incorporating into their body image, with a resulting desire for amputation.” [4]

A true-life story of a person living with BIID

Sixty-one-year-old chemist from Salt Lake City Utah, Chloe Jennings-White is a healthy woman who claims to identify as transabled. Jennings-White’s condition is so severe she uses a wheelchair and wears leg braces to get a ‘paraplegic feel.’ Jennings-White says she has had dreams of living like that ever since she was a little girl. Heck, she once rode her bicycle off a makeshift stage in the hopes of breaking her back and becoming paralyzed.

“When I’m in the wheelchair I’m not even thinking about the wheelchair. It’s just normal for me, but anytime I’m walking it’s always in my mind, sometimes dominating my mind, that this is not the way it’s supposed to be,” she said. “Something in my brain tells me my legs are not supposed to work. Having any sensation in them just feels wrong.”

BIID sufferers often have very specific parts of their body that they believe should not be there. For Jennings-White, she wanted to be paralyzed from the waist down. To achieve that, she has to have her sciatic and femoral nerves severed.

How far has this woman gone to achieve her dreams?

“Doing any activity that brings a chance of me becoming paraplegic gives me a sense of relief from the anxiety caused by the BIID. My friends and family can get a little worried about me skiing, as they know I ski very aggressively and they know that in the back of my mind I actually want to get paralyzed.”

Eventually, she did have a skiing accident which only gave her more good news because she realized she was not alone during the search for leg braces after her accident. She discovered an online community for people like her. “It was a huge relief,” she said. ‘I wasn’t a freak; there were hundreds of others like me.” [5]

Jennings-White has the option of surgery to get what she “truly deserves.” The surgery to severe specific nerves is estimated to cost $25,000. Although she has found a doctor abroad who is willing to perform the surgery, she doubts she’ll ever be able to afford it. “I’ll never be able to afford it, but I know I won’t regret it if I ever can, and I don’t know why it upsets people,” she said.

Jennings-White’s doctor, Dr. Mark Malan said that in the future, people with BIID might be able to temporarily “turn off” use of their limbs.

“One possibility could be to do some sort of nerve-blocking so that that limb could not actually be used for a period of time, to let the patient test the reality of being physically disabled temporarily,” he said. “It would give BIID sufferers a chance to change their minds if they wanted to.” [6]

Since BIID is not listed in the current DSM-IV (The Diagnostic and Statistical Manual of Mental Disorders) as an official disorder, there aren’t any clear-cut treatment options for it. On that note, some authors who wrote a paper entitled “Recommendations for the Treatment of Persons with Body Integrity Identity Disorder” suggest that there is need for the establishment of clear diagnostic criteria as well as therapeutic protocols to deal with the condition. [7]

Antidepressants and psychotherapy do very little to treat the condition. Use of cognitive-behavioral therapy and selective serotonin reuptake inhibitors (SSRIs) has been shown to reduce the stress and depression associated with BIID.

Some clinicians, however, find that treating the symptoms of those obsessions and compulsions can help to reduce the symptoms. [8]

However, people with BIID who desire amputations claim to feel remarkably better and have an improved quality of life after getting it. Some of them practice “living with disabilities” where they pretend to live with a disability after which they experience short-term relief. [9]

How do people feel about those who have BIID

Some people refer to them as pretenders. Other people get in an accident that affects their limbs and doctors try everything they can to save the limb. Therefore, it feels quite disrespectful when a perfectly healthy person ups and decides to chop theirs off.

Some comments on Facebook about Jennings-White case read thus:

As a wheelchair user, I find this really offensive.
She doesn’t get the chronic pain, the endless medication, the constant hospital visits and everything else associated with being disabled. She needs to seek help as she’s obviously not well mentally.

She’s trans-insane. It’s absurd that someone named this and people support this bullsh*t. Stop encouraging such self-indulgence!

Can’t she just “identify” as mentally ill … which is an accurate and useful description of her true disability? Wouldn’t that be more realistic, practical, and helpful to her and those around her?

Twitter hasn’t been left out with people tweeting angrily on the matter.

All in all, a lot more has to be determined on this weird condition. It’s scary to think that people would purposely mutilate their bodies. Hopefully, a clear answer will be found as to why they do this and how to help those affected.