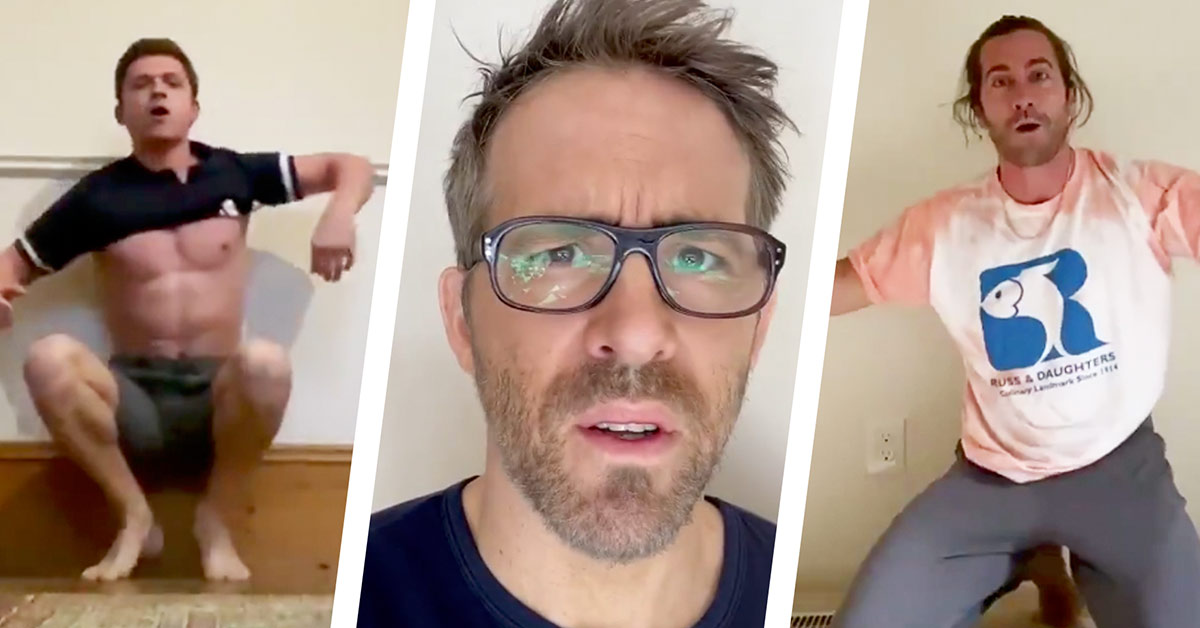 If you think you’re the only one bored out of your mind this period of quarantine, then you should think again.

The boredom cuts across all levels of society and not even the top celebrities are spared. However, they always know how to bring us some entertainment.

Well, he is Spiderman after all so it’s only fair he comes to our rescue during these trying times. Tom Holland, or Spiderman as he is often regarded as is one of the best superheroes on TV.

The 23-year-old British actor has starred in five movies set in the Marvel Cinematic Universe. Some of Holland’s favorite films include Ironman, Thor: Ragnarok, and Avengers: End Game.

So, it doesn’t come as much of a surprise that he’s friends with several of the actors in the movies including Ryan Reynolds and Jake Gyllenhaal. [1]

The natural-born web-slinger was challenged by filmmaker and actor Ollie Gardner to do the Shirtless Handstand Challenge on Instagram, and he did it on April 1. [2]

This challenge is exactly as it sounds. You do a shirtless handstand and attempt to put on your shirt while upside down… yep, that’s about it.

To combat the mind-numbing boredom that has resulted due to the quarantine, people have come up with numerous challenges to keep them occupied and entertained.

While some are crazy, others are pretty interesting. One of them is the handstand challenge.

It does look like fun when you are watching it while lying down on your bed, eating ice cream. Being asked to do it is a whole other ball game.

Heck, Holland appeared to have a little difficulty getting the hang of it despite his background in ballet and all that web-swinging he does as Spiderman.

However, he completed the challenge while showing off his ripped abs and taut back muscles.

After completing the challenge, Holland challenged his best friend, Harrison Osterfield, English actor and model/Spiderman co-star Jake Gyllenhaal, and Ryan Reynolds, to do the same. [3]

Click on the link below to watch Spiderman do his thing

Ryan Reynolds is a whole mood

The Deadpool actor and Aviation Gin founder took to his Instagram story to flat-out reject the challenge. In a short meme-worthy video, Reynolds stared at the camera with a bewildered look on his face that said “why would I ever want to do that,” before exclaiming “No!”

Click on the link below to see Reynold’s reaction

Howard seemed to find that reaction funny as he shared the video and 3 ‘face with tears of joy’ emojis.

Well, Reynolds, you are not alone. Most people would have probably said an even bigger no than you did… I know I would.

The actor who plays ‘Mysterio’ in Spiderman: Far From Home certainly made the challenge look easy.

But then he accepted the challenge, much to Holland’s excitement. Of course, the rest of us were a bit distracted by the upside-down man bun and rippling muscles to notice that the challenge took quite a bit of effort.

In the end, Gyllenhaal challenged Hugh Jackman, 50 cents, and his sister Maggie Gyllenhaal…we cannot wait to see that.

So far, only Maggie Gyllenhaal has accepted the challenge from her younger brother, and she killed it!

Watch the video below

The general reaction was to thank whoever came up with the challenge for giving them a ‘shirtless upside down’ Tom Holland.

After which, they shifted their thanks to Holland for serving them a ‘shirtless upside-down’ Jake Gyllenhaal…you probably see a pattern here by now.

Across all social media platforms, people all over the world have been united with numerous challenges, trends, and more to keep them occupied this period.

Here are a few of them

These are probably the most popular because of the wide audience they can reach. There are so many challenges out there now. A good example would be the shirtless handstand challenge described above.

TikTok challenges typically involve a person lip-syncing to a song and doing some ‘cool’ stuff. Perhaps, the most popular one right now is the ‘don’t rush’ challenge.

No one knows for sure what the origin of this challenge is, but reports show that it was made popular by an Instagram account for African beauty influencers.

A lot of black women have jumped on this trend which is essentially a transformation video from ‘at home comfy looks’ to fabulous and glamorous looks after which they pass the ‘baton’ usually in form of a makeup brush to the next person who does the same thing. [4]

As a result of the quarantine, fitness enthusiasts are unable to go to the gym or workout outside of their homes.

However, WHO recommends 150 minutes of moderate-intensity activity or 75 minutes vigorous-intensity physical activity per week even while we’re at home now. [5]

Several fitness enthusiasts on social media, Instagram especially, have taken it upon themselves to begin workout challenges that anybody can be a part of.

For instance, a 14-day challenge of push-ups, squats, planks, and more would be beneficial for anyone who joins in.

This has always been around in the form of the Sarahah app. However, it’s everywhere now with everyone on social media jumping on the bandwagon.

They usually start by saying “Guys, I’m bored,” then the “ask me anything or write an anonymous message to someone” box pops out.

It’s a great way to kill time, but it has unfortunately brewed some bad blood and stirred up some drama within certain groups.

If you didn’t know that food trends were an actual thing, well, now you do. This whipped instant coffee drink is the latest one to sweep through Instagram and Twitter.

This trend originated from South Korea but has now spread across the world. You’ve probably seen the two-toned sweet drink pop up on your feed several times.

Humans are highly adaptive and resilient. Nothing can hold us down for very long. The COVID-19 quarantine tried, but people are coming up with ingenious ways to keep others occupied this period.

And because there’s no shortage of creative people in the world, it’s just a matter of time before more challenges and trends come out.