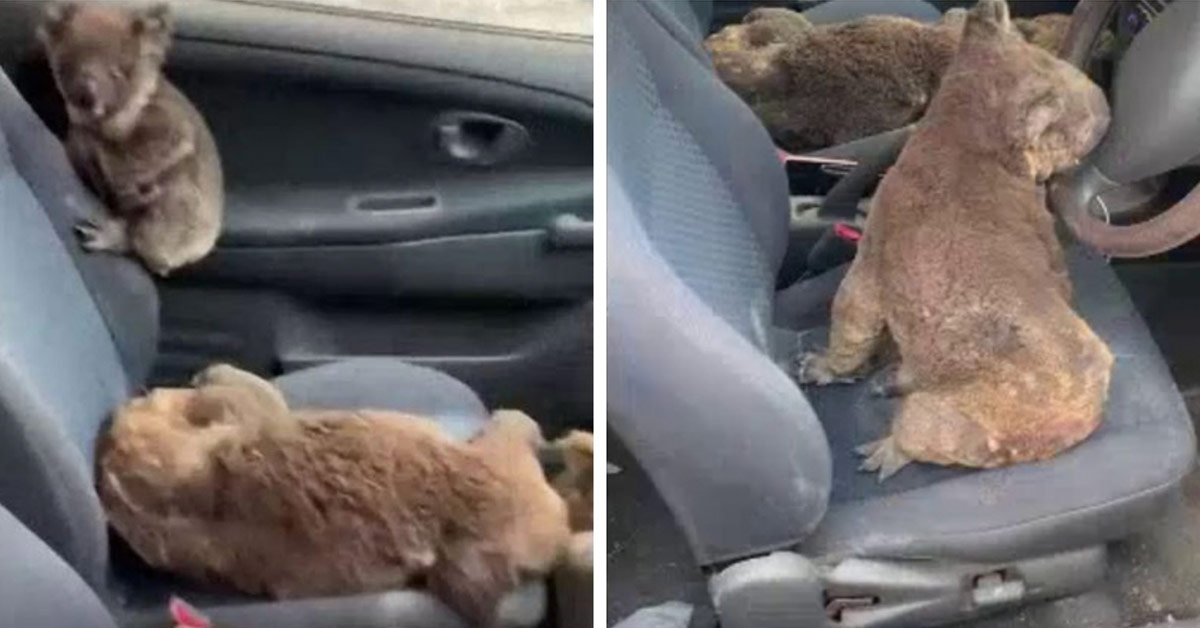 Since the devastating Australian fires began in September, it seems that every day more bad news is coming from it. For that reason, it is refreshing when there is some sort of good news.

Not all heroes wear capes, some are just really good drivers

Granted, the car is no batmobile but it served an incredible purpose. On January 2nd, Australian teenagers shared a video of them filling their car with koalas they had rescued from the fires.

The short footage filmed on Kangaroo Island showed the two boys, 19-year-old Michael Lovegrove and 18-year-old Caleb, driving with the koalas safely tucked in their car. According to them, they rescued about 20 (six were orphaned) and two mothers and their children. [1]

The teenagers had to perform emergency triage

While they would have loved to save all of the defenseless marsupials, they had no choice but to pick those who appeared to be in the most distress. The ones who were active and without burns, and those who seemed like they would be capable of fending for themselves were left alone. The only took the wounded ones.

Their cousin shared the video with the caption, “Amid the terrible bushfires in Australia, my cousins went out and saved as many koalas as they could. Good on ’em.”

In the video, the two boys were picking up koalas with towels and putting them into the car. They had about six in the car at that point. One of them could be heard saying, “Doing a little koala rescue… Just trying to collect as many live ones as we can. Little fellas looking a little exhausted.”

“Shoved the mother in the boot because she was a bit aggressive,” he added.

They came across horrid sights of the damage from the fire. According to them, more than 50% of the koalas they came across were badly burned, and one-fifth of the ones they rescued died of severe injuries the same day.

One of the worst fires ever recorded in the world began to burn in Australia since September of 2019. This fire has destroyed lives, homes, and wildlife. So far, 27 people have been killed while over 2000 homes have been destroyed.

The wildfires have burned over 17.9 million acres of Australia. If you have a hard time imagining how much that is, just picture an area that is larger than West Virginia.

The heatwave was also severe, and the country recorded the hottest day ever with a temperature of 107.4°F, breaking the previous record of 104.5°F in January of 2013. [2]

Impact of the fires on people

Surely, there is no smoke without fire and in this case, there was smoke everywhere. The sky turned bright orange from the flames and everywhere was thick with smoke. The wind speed of up to 80mph didn’t help matters; it pushed heavy smoke all over the country, which caused further fires.

According to the Red Cross, “The intensity and size of bushfires in some areas has led to the creation of their weather systems generating pyrocumulonimbus clouds, trapping heat and generating strong winds and lightning strikes, in turn sparking more fires.”

The smoke is just as dangerous as the fires

Smoke is very irritating and could worsen respiratory illnesses and heart conditions. Even the tiniest particles from smoke can get into the lungs and bloodstream. [3]

It is equally heartbreaking to watch people’s homes go up in flames. The trauma from this event will take a long time to heal.

The impact of the fires on wildlife and the land

Rough estimates show that up to a billion animals have been lost in the fires. Australia is known for its incredible biodiversity and the fire destroyed quite a high level of it within a couple of days.

“A university in Sydney estimates that near 500 million animals have been killed by the fires since September. Half a billion. So many of our animals, wombats, koalas, crocs, platypus, etc. are endangered or threatened species. I don’t think people understand the scale of that number. I’m not sure if our country’s ecosystem and biosphere will recover from this, I really don’t,” said Ben Jameson, resident of the Gold Coast close to Brisbane. [4]

The distressing images of dead animals on the roadside still haunts the whole world. Some were killed directly by the flames they couldn’t outrun, some were killed by smoke inhalation, while others died because of the destruction of their habitat, their only source of food and shelter.

Let’s not forget the economic impacts

The fires have affected local industries, especially the farming industry. Over 8.4 million hectares of land have been charred by the flames and one can only imagine how that will affect the agricultural state of the country.

Price of foodstuff, especially fruits and vegetables will be sure to go up, tourism will be negatively affected, the pollution of the air by smoke will reduce worker productivity, affect crop yield, and increase expenses made on health issues.

These can set back the economy of the country for some time. [5]

Why are these particular fires so bad?

Australians are not new to bushfires, but this one is particularly devastating. Videos show it burning like Armageddon, and firefighters find themselves in a battle against one of the strongest elements of nature. This was caused by unbelievably high temperatures, longer drought periods, and powerful winds.

Climate changes are also to be blamed for this fire as it has brought about longer periods of extreme heat in an already hot place. Its extreme heat also makes vegetation drier and easier to catch on fire. [6]

The whole world sympathizes with Australia, and countless NGOs and individuals have come together to help out in any way they can. From evacuating people to rescuing poor animals from the fires, everyone is trying to do the best they can do with the resources they have.

Kudos to everyone who has helped out, much love to the people of Australia; hopefully, things will get better soon and everyone who was affected can rebuild and regain what they’ve lost.