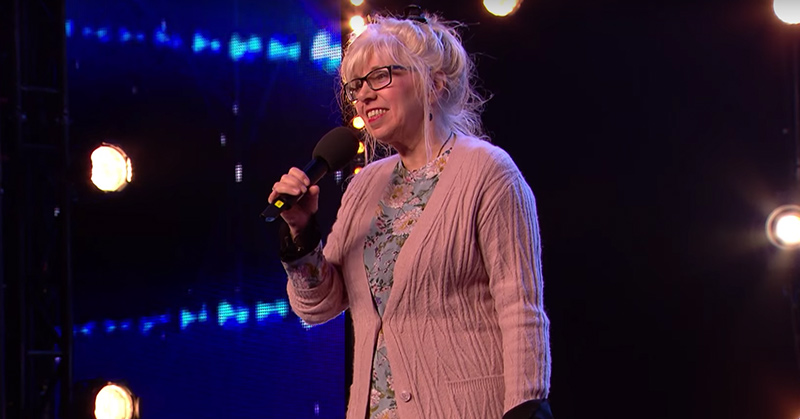 After a long day of work, do you ever come home and watch those reality television talent shows? Maybe you watch them because you like hearing the judges’ harsh critiques, maybe the contestants’ back stories make you tear up and make you feel human again, or maybe you can’t wait to be blown away by a 4-year-old boy with Aretha Franklin’s voice… In any case, that is basically what happened on in Season 12 of Britain’s Got Talent.

Jenny Darren: The 68-Year-Old from Birmingham

When Darren, the retiree who now lives in the Cotswolds, took the stage and stood in front of the judges, you could tell they thought it was cute that she thought she could win in show. But what came after the judges wished her good luck clearly shocked them… (Goes to show that you shouldn’t judge a book by its cover.)

As Darren let down her hair and started removing her cardigan, then her shirt, then her skirt, she reveled her true outfit – all-black attire that matched her audition song perfectly… AC/DC’s Highway to Hell. Watch her incredible performance below!

All the judges – yes, including Simon Cowell – were floored by her performance. So, where did this retired Rockstar come from? Keep reading because she has pretty impressive story.

Since her childhood, Darren was surrounded by and involved in music – especially the rock genre and rhythm and blues. Growing up, she was part of the same circles as Jimmy Page and Robert Plant from Led Zeppelin and worked with Iron Maiden’s drummer, Nicko McBrain. On top of all those incredible connections, she actually supported AC/DC on a six-week U.K. tour in her early twenties. [1,2]

Although she eventually transitioned into jazz and classical music, she Darren has recorded over 10 albums, the most recent of which was a collection of covers released in 2017 called “Jenny Darren & The Lady Killers.” [2]

Darren is yet another example of someone who doesn’t let age or appearance limit their capabilities. Whether it has to do with health and wellness or life-long hobbies, don’t put them off! You never know who your passion will inspire.

Here’s their cover of AC/DC’s Highway to Hell!