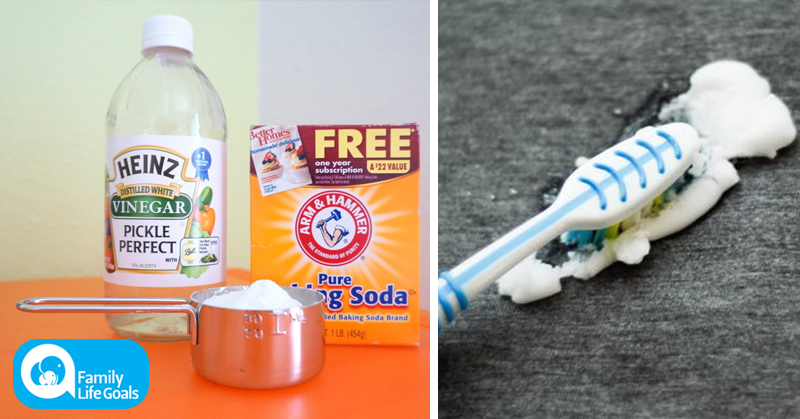 My favourite cami is soft cream, lace border, with tiny pearl buttons, it’s so pretty. A few weeks ago I had an early morning coffee spill (curse you, public transit!). Poor thing never had a chance. I couldn’t throw it out. It’s not that it’s expensive, I just really, really love it.

Of course, I can’t bleach it. The tag says “non-chlorine bleach only”. But I didn’t have non-chlorine bleach. I didn’t even have real bleach. I’m in a bleach free household (the smell makes me sick). I tried several washes, cold water first, then hot. The stain set. Irremovable. I had lost hope. So I did the only thing I could think to do.

I called my mom.

My mom’s got a hundred different ways to clean out stains. She had too – three kids means a lot of washing clothes. So I scraped together information from her (and my gramma, bless that lady!) to get to the stain out. I got a bunch of recommendations: lemon juice, baking soda, white vinegar, rubbing alcohol (hydrogen peroxide 3%), and eco-friendly dishwasher detergent.

The Hazards of Bleach

Now, you might be wondering about why I chose not to go the bleach route. While the smell makes me sick, there are a few other reasons that some intensive research has told me about bleach and bleach solutions.

Bleach is corrosive. Any time I used it to clean my bathroom, my hands would be red, raw and occasionally crack and bleed. But it’s actually harmful to a bunch of different surfaces including: stainless steel, aluminum, copper, brass, marble, or granite. Because it’s corrosive it creates divots in the surface, leaving more uneven areas for bacteria to hide in.

Bleach exposure makes asthma worse. Inhalation has been noted to deteriorate the lungs and esophagus lining in addition to the scarring of the respiratory tract. It can also cause asthma in adults who are consistently exposed to it. Children in particular are susceptible because their lungs are still developing.

Bleach at home means your child is more likely to get sick. Researchers examined over 9,000 children between the ages of 6 and 12 throughout 19 schools in the Netherlands, 17 schools in Finland, and 18 schools in Barcelona, Spain.

“The authors found that nearly 72 percent of respondents from Spain used bleach frequently in their homes, while only 7 percent of Finnish households did. Spanish schools, meanwhile, were cleaned with bleach regularly while Finnish schools were not. Researchers found that the frequency of infections among children was linked to higher amounts of bleach use by parents at home — and the differences were quite evident when it came to the flu, tonsilitis, and other infections (the risk of flu was 20 percent higher in bleach households, and the risk of recurrent tonsillitis 35 percent higher in bleach households). The risk of any other infection happening again was 18 percent higher among the children exposed to bleach.” (read more here)

34, ooo calls to the poison control center were attributed to bleach ingestion in 2011. 12, 000 of those calls were for children under 5.

For other ways to clean your home click here and here

This was a gramma suggestion. She said to slice a lemon (round slices) and put slices on the bottom of a pot, put the laundry on top, and another layer of lemon slices and pour hot water over the lot. She said to bring that to a boil and let it sit for an hour.

The acid in the lemon helps to bleach out, or whiten, the stains and generally improves the look of your whites.

This was my mum’s suggestion. White vinegar is something she adds to all of her white laundry loads, “just a cup” she said. She just puts it in the bottom of the basin before her laundry goes it.

Another great idea from my mum. This softens the water, and because it doesn’t “dissolve” in water, it adds an extra bit of scrub to the laundry (not good for delicate fabrics), but I’ve actually used this with the towels load and to clean my shower curtain!

Is actually just a non-chlorine bleach. Half a cup in your laundry, or a spot treatment for deep stains does wonders!

This is solely my gramma’s influence, and something I have to take her word on (neither my mother nor I own a dishwasher) but she swears 1/4 cup of the granulated stuff will lift most stains out.

Because my mum and my gramma gave me so many suggestions, I decided to combine two of the ingredients for a heavy duty spot treatment. I made a hot water/baking soda paste, rubbed it into the fabric and then poured hydrogen peroxide on the stain. I let it bubble, sit for an hour and then tossed it in the washer with a cup of white vinegar and voila! no more stains.

Got other recommendations? Want a new article about something that YOU want to know? Let me know! Sound off in the comments!