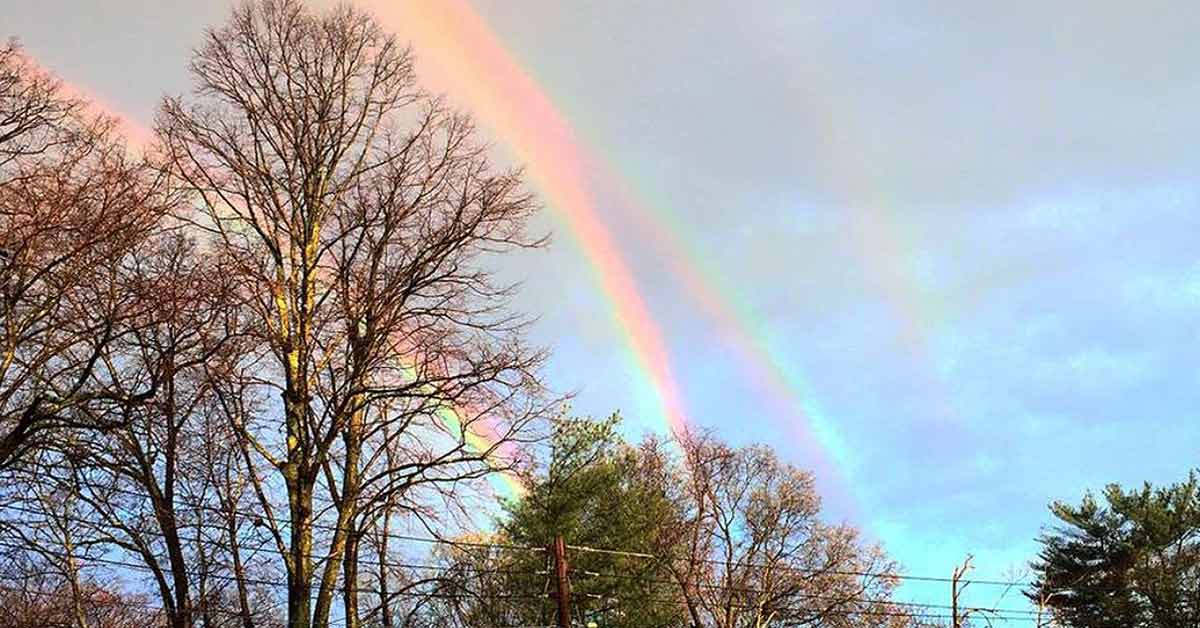 Shout-out to people who always whip out their cameras to capture beautiful, rare sightings for the rest of the world to share in. This is one of the great things about technology. You might not be there physically, and although it won’t feel quite the same, we still get to see some of the most awesome natural phenomena from around the world.

In 2015, Amanda Curtis, a commuter in Long Island, New York captured a beautiful double-double rainbow curving across the Glen Cove sky on a lovely bright day. [1] The sight was so beautiful that when the photo went viral the next day, many people insisted it was Photoshopped. Sighting a double rainbow it rare enough on its own, much less a quadruple!

However, meteorologists rushed to the rescue to clear up the confusion. While actual quadruple rainbows are possible but extremely rare, what Curtis captured was technically two double rainbows. Rainbows are formed when light from the sun is reflected by droplets of water hanging in the air. A double rainbow is formed when some of the reflected light are reflected a second time.

All the science doesn’t take out any of the magic

A closer observation of the photos shows two conspicuous arcs and two fainter ones higher up in the sky. The first two rainbows are the primary and secondary arcs and the fainter pair was reflected a second time.

While Curtis didn’t really see four distinct rainbow arcs, the photo is still one of the most beautiful representations of color, hope, and life that we’ve seen in a long time.

According to Paul Neiman, a research meteorologist at NOAA’s Earth System Research Observatory, a large body of tranquil water is required behind the observer before they can witness the doubly reflected arcs. The observer was in Glen Cove, so it could have been water from the Oyster Bay or Hempstead Bay.

“For the much rarer reflected-light rainbows shown in this spectacular photo, a large glassy-smooth water surface is required behind the observer,” Neiman wrote in a lengthy but thorough Facebook explanation.

“This smooth water surface reflects the sun, such that a second solar light source is generated. This reflected sun, which is located the same the number of arc degrees below the horizon as the real sun is above the horizon, creates a second primary and secondary rainbow on the opposite side of the sky from the sun, but with the center of these reflected-light rainbows above the horizon. The geometry dictates that the regular and reflected-light rainbows will join at the horizon, as this photo shows.”

These rainbows can occur under the strictly perfect conditions of heavy rain and extremely bright sunlight, which are a major long shot at happening together. “You need a fortuitous small hole in the clouds combined with torrential rain,”  said meteorologist Raymond Lee to National Geographic. [2]