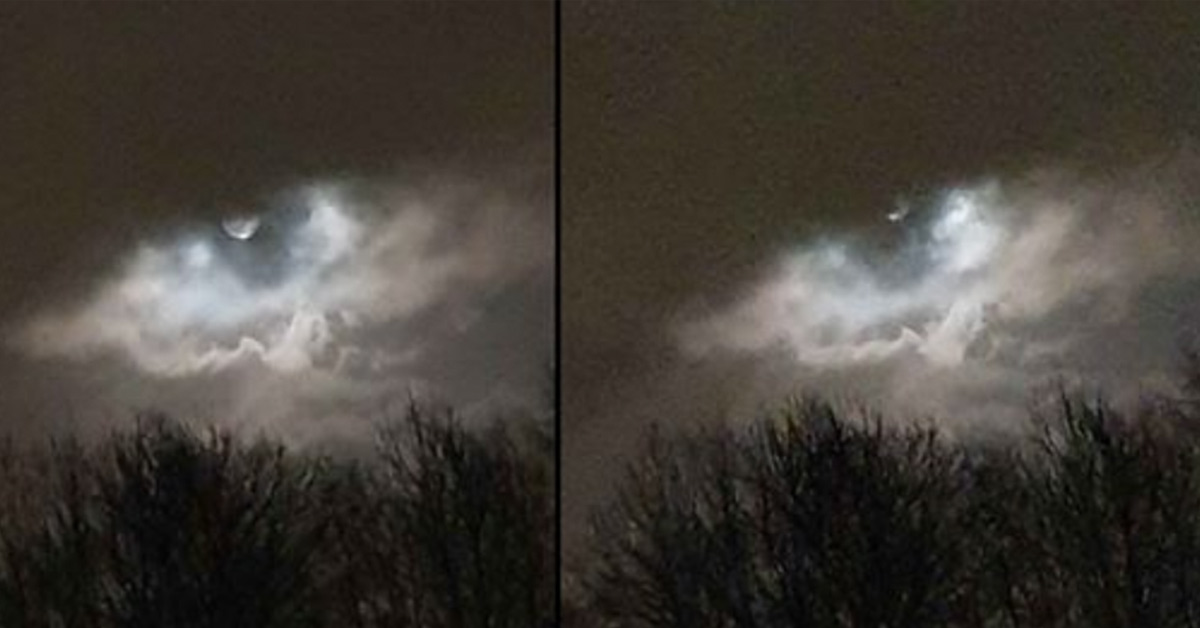 Last month, Storm Ciara, referred to as Sabine in some parts of Europe, barraged across the United Kingdom, Ireland, the Czech Republic, the Netherlands, Belgium, Switzerland, and Germany, taking along with it, at least ten lives. The storm, which was a long-lived and powerful extratropical cyclone brought heavy rainfall and high winds that caused widespread flooding and severe damage. But even amid the chaos, a beautiful photo that has left everyone gaping in amazement has emerged.

The eye of the storm

Moments after the storm ravaged some parts of Ireland, France, the United Kingdom, and other parts of Europe, a woman captured the perfect ‘eye of the storm.’ The snaps show a cloud formation that had huddled around a full moon, making it look like Mother Nature or some divine being out there is casting a watchful eye over the earth. [1]

When Sarah Hodges, 48, from Bolton set out to take some snaps on the 11th of January, she never imagined that she would capture a spectacular sight that would go viral. According to her, she noticed the moon was shining bright in the evening. As with all moon lovers, she took out her Samsung S9 phone and took some snaps, which she initially wanted to share with her friends and family. But life has its plans; instead of the regular picture she was hoping to take, she captured an awe-inspiring one.

She admits that she is lucky to have captured the amazing photos with her phone from her bedroom window, even when professionals who have spent thousands of dollars on cameras struggle to get the perfect shot.

“I took the pictures last Tuesday 11 Feb 2020, between 9:34 pm and 9:39 pm, just from my bedroom window at my home address, ” said the 48-year-old who works as a baker. “The moon was shining through the kitchen window, so I went upstairs and just kept taking pictures. I am obsessed with the moon, sunset, sunrise, and the sea. I just used my Samsung S9. I know I got lucky; people spend thousands on cameras to get the perfect shot. I feel overwhelmed and proud, as it’s a once in a lifetime shot… which I do understand.“

Hodges didn’t immediately see the image she had captured. It wasn’t until she was scrolling through the photos did she notice that the moon was centered around the ‘moving’ cloud. [2]

“It was only when scrolling back through the images that I noticed the moon centered around the clouds because in real-time, the clouds were constantly moving. I took the pictures manually without any shutter settings, so I was incredibly lucky to get the shot,” she said.

Could it be God looking down on us or just a perfect picture captured at the right time?

Understandably, the post has created a lot of buzz on the internet, gathering a staggering 121,000 likes and 189,000 shares across some social media platforms. Users have praised her for taking the captivating shots.

For some religious people, it was a perfect sign that God was looking down on earth and reminding us of his promise never to destroy the world with a flood again, just like the days of the biblical Noah. For others, especially the non-religious ones, it was just the perfect picture captured at the ideal time.

Regardless of the leanings of each person, one thing is sure: the picture is undoubtedly inspiring.

The snaps weren’t the only fascinating thing gotten from Storm Ciara: the weather revealed a track of a dinosaur believed to be over 130 million years old. Yes, you read that right.

“All this weather is revealing traces of vanished worlds along our coastline. This is a fascinating example of how events like Storm Ciara continue to expose traces of ancient environments around our geologically unique coastline, often in plain sight. Sandown Bay revealed this beautiful 130 million-year-old dinosaur track yesterday, preserved in the brightly colored clay, ” said Theo Vickers of Wight Coast Fossils.

Britain’s Storm of the Century

From the 7th to the 16th of February, Storm Ciara, a powerful Atlantic storm, which has been termed ‘Britain Storm of the Century’ by some people ravaged some parts of Europe.

In England, over 320,000 businesses and houses had trouble with power, owing to the damage caused by the winds of speed that swept through the country. France wasn’t left out of this power disruption. Over 90,000 homes were also affected by what was termed ‘their biggest power outage.’

In all of the countries affected, roads and rail lines were blocked by the collapse of buildings and trees. In Scotland, there was a problem with the signaling system, and Scottish rail officers had to warn people to tie down sheds and trampolines, over fears that they could be blown away onto the tracks.

The severity of the storm prompted airlines to cancel scheduled flights. National and regional railway companies were not left out. Train routes, as well as ferries across Germany, and the United Kingdom, were also canceled.