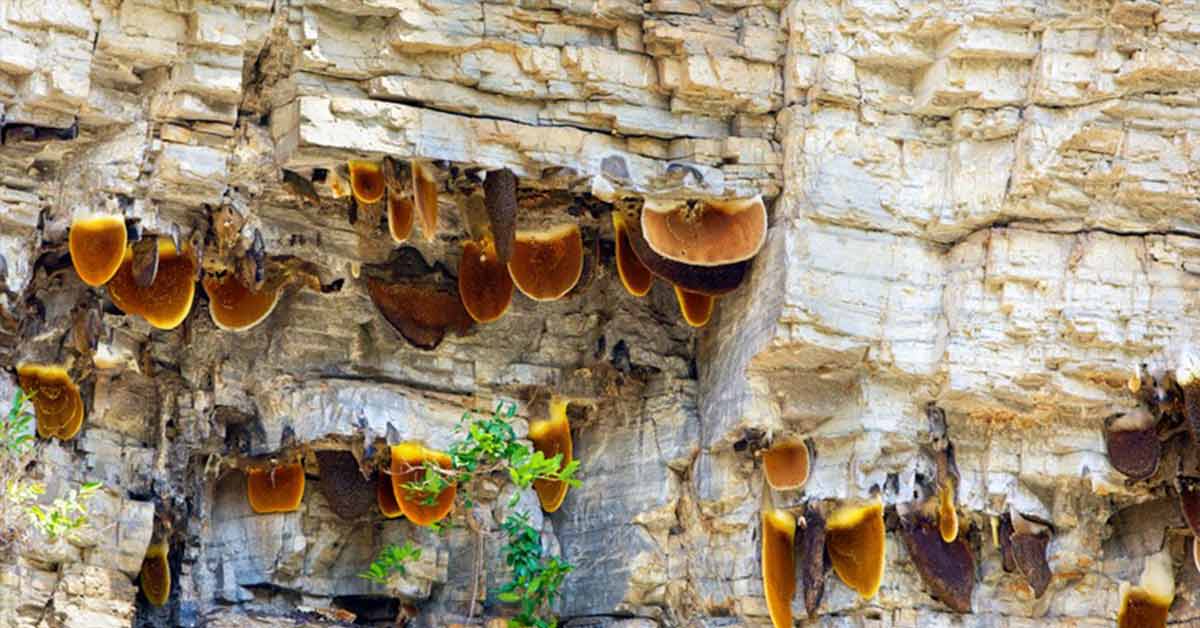 High up the mountains of Bhutan, Nepal, and India, lives the Himalayan giant honeybees, the world’s largest bees known to science. Famous for their size, this species is also known for making mad honey — a rare honey with psychotropic effects. When taken in small doses, this sticky reddish fluid may be very pleasant; however, an overdose may lead to seizures, numbness, nausea, extreme hallucinations, fainting, irregular heartbeat, blurred vision, low blood pressure and in severe cases, death. [1]

“One has to be careful not to eat too much of the honey, says Jangi. Two to three teaspoons is usually the correct dose. After about an hour, you are overcome with an urgent need to defecate, urinate, and vomit. “After the purge, you alternate between light and dark. You can see, and then you can’t see,” says Jangi. “A sound—jam jam jam—pulses in your head, like the beehive. You can’t move, but you’re still completely lucid. The paralysis lasts for a day or so,” Mark Synott reports for the National Geographic. [2]

Harvesting this unique honey is very difficult and not for the faint-hearted. This is because the sting of this bee can pierce through the thickest of beekeeper suits. Then there’s also the location of the crescent-shaped hives. Those who dare to gather the honey are at the mercy of precarious rope ladders that dangles from hundreds of feet above the ground. Their lives hang in the balance, and they pray silently that the rope wouldn’t give away. One step on the wrong rung and they could die.

Mad honey is reportedly being sold for about 60–80 dollars per pound on the black market. Although this may seem like a hefty price, the dangers involved in harvesting, and the time it takes to learn this trade makes it an unworthy venture. [3]

The Kulung people of Eastern Nepal

The Kalung people of eastern Nepal are known to have perfected the skills of this highly specialized trade, but even then, not all of them can brave such difficulty. Those who can, do so with the permission of Rangkemi, the guardian spirit of difficult, dangerous places and bees. Before going on such dangerous tasks, certain sacrifices are performed to appease the spirits inhabiting the cliffs. Failure to do so may spell doom for the ‘climber.’ However, with the death of Mauli Dhan Rai, known as the “the last honey hunter” in 2018, it is unsure whether or not, this dangerous tradition will survive.

“Yeah, I’d like to have the dream but I haven’t, and I don’t know why. Of course, I could harvest the honey. But other people have tried without the dream, and bad things have happened to them. Their fathers have died, their children have died, their houses have fallen in, and their crops have failed. And I’m afraid of that,” said Ashdan, Mauli Dhan Rai’s assistant and climbing partner. [4]

The Kalung people of eastern Nepal also use mad honey as an antiseptic and a remedy for coughs. The beeswax, on the other hand, is used to cast bronze statues of gods and goddesses.

What does mad honey contain?

The psychotropic effect of mad honey is gotten from the rhododendron, an evergreen flower that Himalayan bees feed on. This flowering plant, which contains chemicals called grayanotoxin, is found in small amounts in Caucasus, Japan, Southern Turkey, New Zealand, South Africa, Nepal, Australia, and a few states in America.

Grayanotoxin, when consumed in any form, works on humans by binding the voltage-gated sodium ion channels found in cells. In turn, this keeps the channels from closing quickly

“The result is a state of depolarization in which sodium ions are freely flowing into the cells, and calcium influx is on the rise. The increase in calcium stimulates the release of acetylcholine,” forensic sociologist, Justin Brower explains in his blog. [5]

Also known as the Himalayan cliff honey bee, this species is native to the mountainous regions of India, Nepal, Bhutan. It nests at altitudes between 2,500 to 3,000 m. Its nest, which can contain as much as 60 kg of honey overhangs on the southwestern faces of vertical Himalayan cliffs.

Its rare and unique honey sells for roughly six times the price of regular Nepali honey.