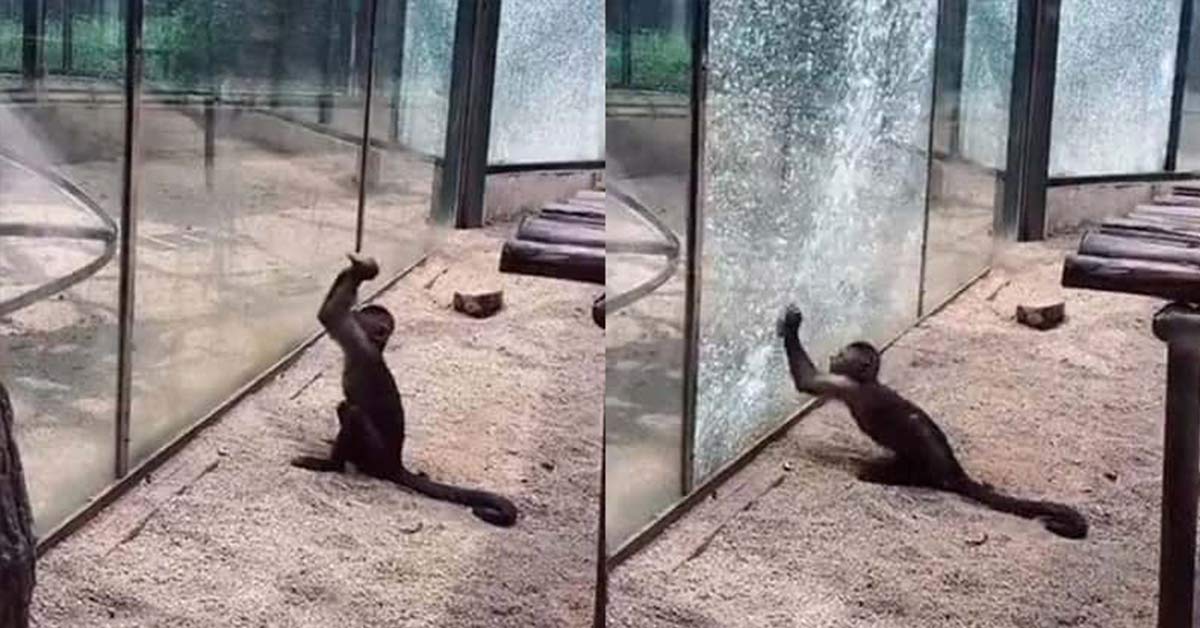 Animals are smarter than we give them credit for. There are many stories of animals exhibiting over-average intelligence out there, from dogs who can sense their owner’s seizures, to dolphins who have been trained to take pictures with cameras on their flippers.

Here is another fantastic “intelligent animal” story for you, featuring a Colombian white-faced capuchin monkey. A resident at the Zhengzhou Zoo in China’s Henan province, the monkey’s intelligence was underestimated until it attempted to escape from its glass enclosure by banging a rock against the wall on August 20th.

Planet of the Apes may have been fiction, but this monkey’s antics are very real and quite funny. Monkeys have been known to use tools to crack open nuts and grind food, but this smart rascal was seen taking that ability a step further.

The above video was shared on social media, visitors can be heard laughing as the monkey raised the stone above its head and began striking the glass repeatedly. The laughs soon turned into gasps of surprise when the capuchin succeeds in hitting the glass with enough force to fracture the panel on his second try. The monkey, which seemed as  surprised by what it had done as his watchers, ran away as the glass shattered.[1]

Zoo officials released a statement after the incident went viral saying that no guests were injured and the monkey was also unharmed. All rocks in the enclosure were reportedly removed. [2]

This isn’t the first time this particular capuchin monkey showed above-average brainpower. A zoo staff member, Tian Shuliao, told reporters that it had an affinity for using tools to open walnuts while other monkeys try to bite it open. “But it had never hit the glass before though. This is the first time. It’s toughened glass, so it would never have gotten out.”

Capuchin monkeys are known to be very bright and easy to train, and can sometimes be seen in Hollywood movies exhibiting exaggerated human-level intelligence.

In 2017, scientists in Panama’s Coiba National Park at Jicaron Island observed white-faced capuchin monkeys using stones almost half their body weight as shovels to dig and hammers to smash open shellfish, nuts, and other foods. A report of their findings, which showed ecological drivers and evolutionary underpinnings of stone tool use, could be seen here.

Monkeys are not the only smart animals in the animal kingdom. Chimpanzees have been known to use stone tools and even make spears for hunting other primates. Crows have been known to craft twigs, leaves, and even their own feathers into tools. Sea otters, the weasels of the sea, use stones to hammer abalone shells off rocks and crack the hard shells of prey open. [3]

The ingenuity of animals seems endless. When asked what he considers to be the most impressive examples of primates using tools, Professor Ian C. Colquhoun, a lecturer at the Department of Anthropology at the University of Western Ontario, replied,

“I think the stone tool use of bearded Capuchins is quite impressive when you consider that some males are using stones that are about one-quarter of their body weight to crack the palm nuts.” [4]