12 Signs There Is a Toxic Person in Your Life 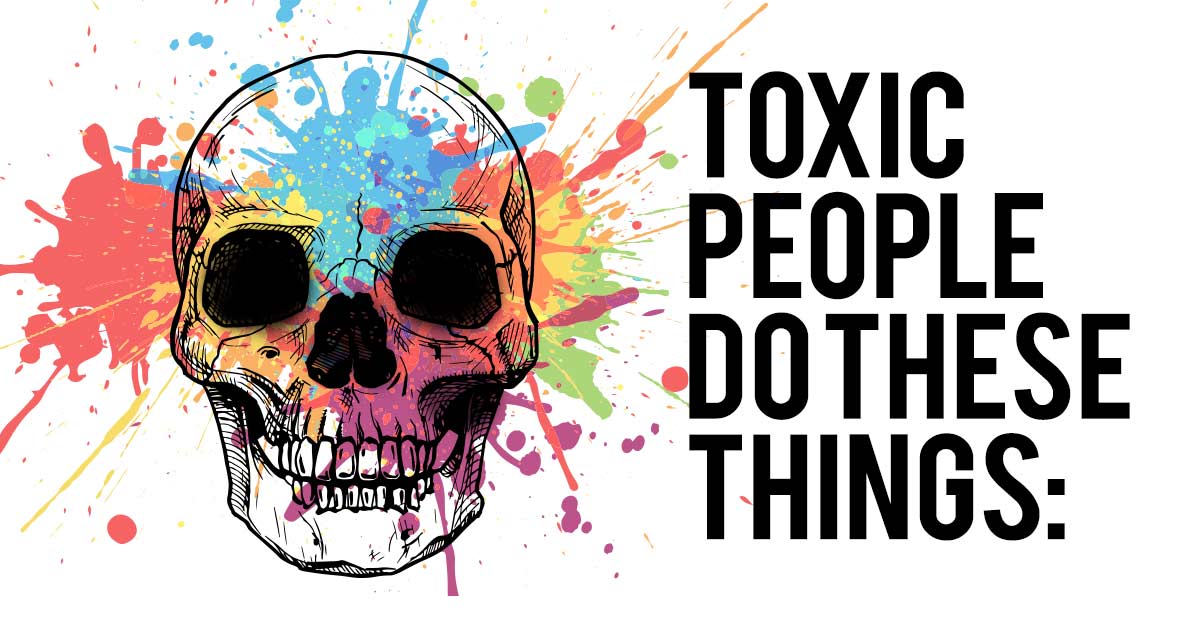 Narcissists, gaslighters, psychopaths, sociopaths — whatever name psychology has given them according to their behaviors — these people are toxic and not good for your health. A toxic person fuels negativity and tries to manipulate or control others. Their major character trait is being extremely critical of the efforts of those around them. They nag, moan, and complain about the most insignificant things. They tend to be needy and entitled, and do not like being told they need help or therapy.

Speaking to Psych Central, Australian psychotherapist Jodie Gale explains the major cause of toxicity in a character. [1]

“Often the person is deeply wounded and for whatever reason, they are not yet able to take responsibility for their wounding, their feelings, their needs and their subsequent problems in life. They may over-identify and act out the parts of who they are, such as the victim, bully, perfectionist or martyr. They act from these parts trying to get their needs met, albeit in an extremely unhealthy way.”

Having a toxic person in your life can affect your emotional and psychological wellbeing. You’ll dread having to see them or speak to them. You’re always exhausted in their presence and they make you feel ashamed of yourself. Unfortunately, we can’t always avoid them the way we want to. Our parents, spouses, lovers, best friends, bosses, and co-workers could be toxic people. [2]

Below are 12 signs that you have a toxic person in your life:

They have no respect for anyone

Toxic people think they are royalty surrounded by inferior subjects. They have bad manners and no social decorum, and they have absolutely no problem with treating other people like trash. They have no regard for your privacy or feelings and will always do whatever they want, not considering the fact that other people might be upset by their actions.

Toxic people need to have an edge over others, and they’ll get that by being abusive and wicked. Nothing you do is ever good enough for them, and they have no problem dishing it out to you with the most hurtful words and actions. This is bad for your mental wellbeing and if anyone physically abuses you, report them to the authorities.

They are attention seekers

Toxic people have this annoying trait of always wanting the spotlight on themselves. They can’t stand it when someone else takes the floor or gains the attention of the crowd. They are needy and usually narcissistic. They don’t want to listen to anyone else’s stories because they always have a million more to tell.

They need cliques to survive

Toxic people can’t get rid of the high school need for a clique or a group of people with the same status quo as themselves. They prefer to be with people who they are better than, where they’ll feel a sense of importance and self-elevation. They thrive on admiration and public approval, and these groups enable them to express their self-instituted authority to the fullest potential.

They have no empathy

All toxic people have that one trait of psychopathy where they are unable to feel compassion or empathy for other people. They may openly sympathize and pat someone on the back, but it doesn’t come from their hearts. It’s one of the few times they try to appear human. Toxic people don’t care about what you’re going through at the moment. The attention will have to shift from them to you, so it’s a no-no.

A toxic person doesn’t know what it means to look on the bright side. They are always fishing for obstacles, potholes, loopholes, and even the slightest cracks in other people’s efforts. They don’t even try to commend you for the good work you have done. They jump straight out with the things you should have done and why your efforts are useless.

They are always the victim

Toxic people always play the victim card. They are usually master gaslighters. Even when it’s as clear as day that they’ve hurt you, they’ll manipulate the situation to blame someone else. Everyone is always against them and out to destroy them.

They interrupt other people disrespectfully

Toxic people would cut you off while you’re making a point. They don’t care about who you are or what you’re saying. They just have to talk when they feel the need to. Everyone interrupts others at some point, but usually with an apology. Toxic people won’t even know they are wrong because, in their minds, everyone wants to listen to them at all times.

They are never wrong

A toxic person can never admit to being wrong or making mistakes. They usually flip out when they are called out on their oversights, turning the tables and placing the blame on someone else or something abstract. They get aggressive, violent, and angry when a mistake is tagged on them. They believe they are too perfect to ever be wrong.

They try to manipulate others into doing their jobs for them, and if no one will take the bait, they resort to lying and making up excuses. Toxic people never step up to their responsibilities and obligations. Even when they are fully equipped to perform these duties, they won’t do it because they just don’t want to. It’s out of character to be responsible.

They have to fuel their arrogance

…and they usually do this at the expense of other people’s pride and dignity. A toxic person isn’t afraid to publicly compare their strengths with your weaknesses just to prove a meaningless point. To others, it may make no sense, but to them, it means everything because they’ve just fed their ego a morsel. They rise by bringing other people down.

They are bad listeners

Having a conversation with a toxic person is like pouring water through a funnel. It goes in one ear and flows right out the other. They don’t take anything you say to the heart or try to come up with words of advice for you. How can they, when they are not really paying any attention. They are usually thinking of what they’ll say when you’re done talking.

Dealing with toxicity in your life

Toxic people are either toxic by nature or by their life experiences. There’s nothing you can do about that. If you don’t distance yourself from them, they’ll consume you and flatten your self-esteem to the lowest level. Being around toxic people is bad for your wellbeing. They can hurt you so much that your pain could graduate to physical illness.

You have to keep away from them and surround yourself with happy, positive people. [3] It’s true that sometimes we can’t cut off toxic people because they are a part of our everyday lives, but we can try to limit the amount of interactions we have with them. Walk out of a toxic relationship before you become as bitter and as hateful as your partner is. Always think about your happiness and surround yourself with people who don’t try to hurt you or make a fool out of you at every turn.

Don’t let anyone treat you badly. You deserve all the love, kindness, and compassion in the world.