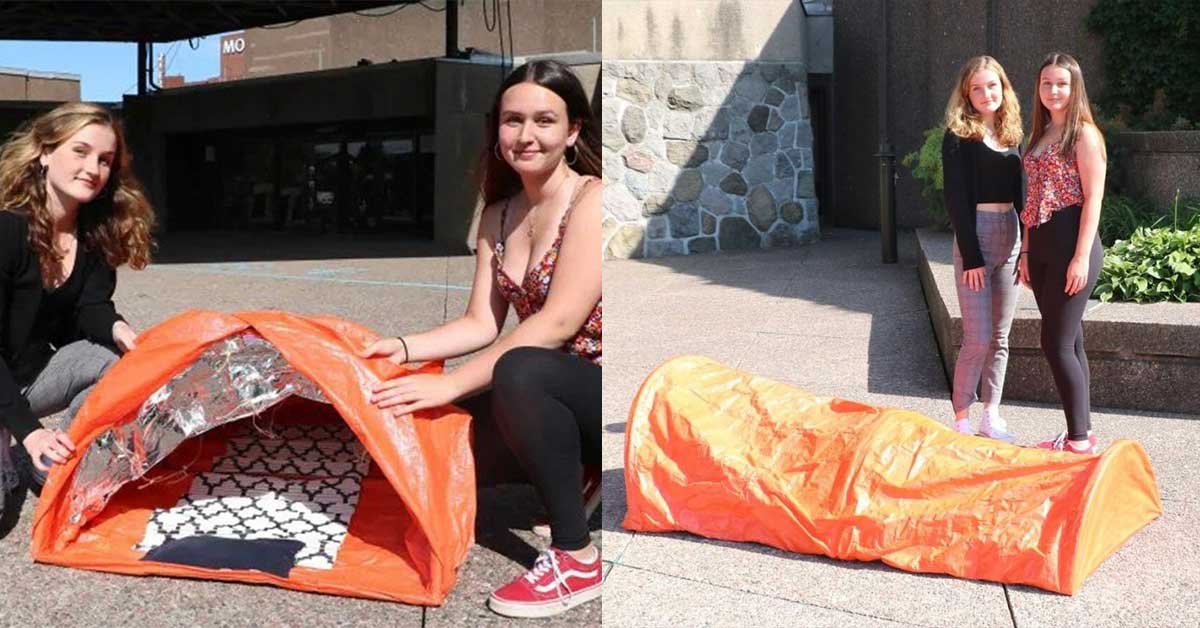 Nowadays, high school projects have gone beyond the typical homemade volcano or vegetable-powered appliances. Students are coming up with ingenious ideas that help humanity a great deal.

These are not your everyday high school students

These two young girls, Adriana Vutrano and Pasha Jones, are extraordinary. They took a very bad situation, turned it around, and gave it the prospect of becoming a huge win for society.

The students of McDonald’s High School partnered up for the science fair at their school. For the fair, every student was expected to come up with an idea and present it. It wasn’t a tough decision as they already knew what they wanted to work on.

According to Jones, she had lost an uncle who was mentally ill and homeless. “My uncle actually died on the streets. Due to mental illness, he became homeless and started living on the streets.”

The 15-year olds understood that due to their mental state some people might not want to go to shelters; instead, they would rather sleep on the streets. Regardless, the teenagers were motivated to keep them warm during the cold nights and cool during the hot nights.

“We wanted to create something that they could use that can actually help them stay on the streets without having to use the shelters,” said Jones. [1]

One of the major issues about being homeless (other than homelessness, of course) is having to leave your belongings on the roadside while you go around for the day. These teens came up with this “Portable House” idea to cover for all needs including protection of property, protection from the cold, and provision of a “roof” (however makeshift it is) over their heads.

The Portable Houses are essentially backpacks that can be made into tents. The six-foot-long tents can be fitted with handles to turn them into backpacks. The “tent” is made with materials locally sourced from a hardware store. They include hula hoops, ropes, metal hangers, and tarp. At the end of construction, each backpack weighs 2 kg.

According to the Vutrano, “It’s like an accordion. It contracts and expands. It expands up to around six feet.”

The temperature inside the tents can be regulated

The girls had the backpack tent lined with space blankets to make sure the user is protected from the famous Canadian cold.

“In the winter, it’s six to seven degrees warmer inside,” said Vutrano. [2]

Don’t worry, they didn’t forget about the hot summer months. They made the tents reversible so it doesn’t overheat in summer. Sounds complicated right? Well, it is the opposite of complicated. Vutrano explained further, saying, “We want to make the portable house reversible, so the space bank blanket is on top. The sun reflects off of it so it cooler inside.” [3]

Like all good scientists, the girls tested their invention

They used themselves as guinea pigs to test their projects by going out into the streets of Montreal and spending all day in their tents. “We tested outside at zero degree weather, and we stayed in all day. It’s super comfortable,” said Jones. [4]

What about the science fair?

While the teens certainly had purer motive than just winning, they did pour their hearts and souls into the project. They impressed the judges of the science fair and of course won.

What’s more? They went on to showcase their invention at the Canadian Wide Science Fair in New Brunswick. Jones described the experience as “a great one.”

What’s next for “Portable House”?

The brilliant duo intend to mass-produce their invention; thus, they are on the lookout for sponsors or partners including NGOs, companies, and even the government who will help them out. They figure the cost of one would be around $10 if all the materials are bought in bulk as opposed to buying each one as a separate unit.

“We just need someone that could help us create it as a mass volume,” said Jones.

At the end of the day, all they want is to be able to make a difference in the lives of homeless people in Montreal and perhaps all over the world.

The largest city in the Quebec province of Canada, Montreal, is struggling with this very real challenge of homelessness. As of 2018, there were 3,149 homeless people in Montreal with 678 of them sleeping on the streets. [5]

As for the entire province of Quebec, visible homelessness — people who went to emergency shelters or spent the night outside — runs in the thousands, 5,789 to be precise.

Reports show that more than half of the people living on the streets in Quebec are in Montreal. According to Chantal Rouleau, provincial minister responsible for Montreal, “Large cities face a specific challenge when it comes to homelessness and ours is no exception.” [6]

At this point, the goal is to eradicate homelessness in the city. However, with the statistics getting worse by the day, ideas like Jones and Vutrano’s — temporary fixes — are welcome.