A Year after Murdering an Innocent Man in His Home, Ex-Cop Amber Guyger Has Been Sentenced To Ten Years in Prison. The Victim’s Brother Hugged and Forgave Her in the Courtroom 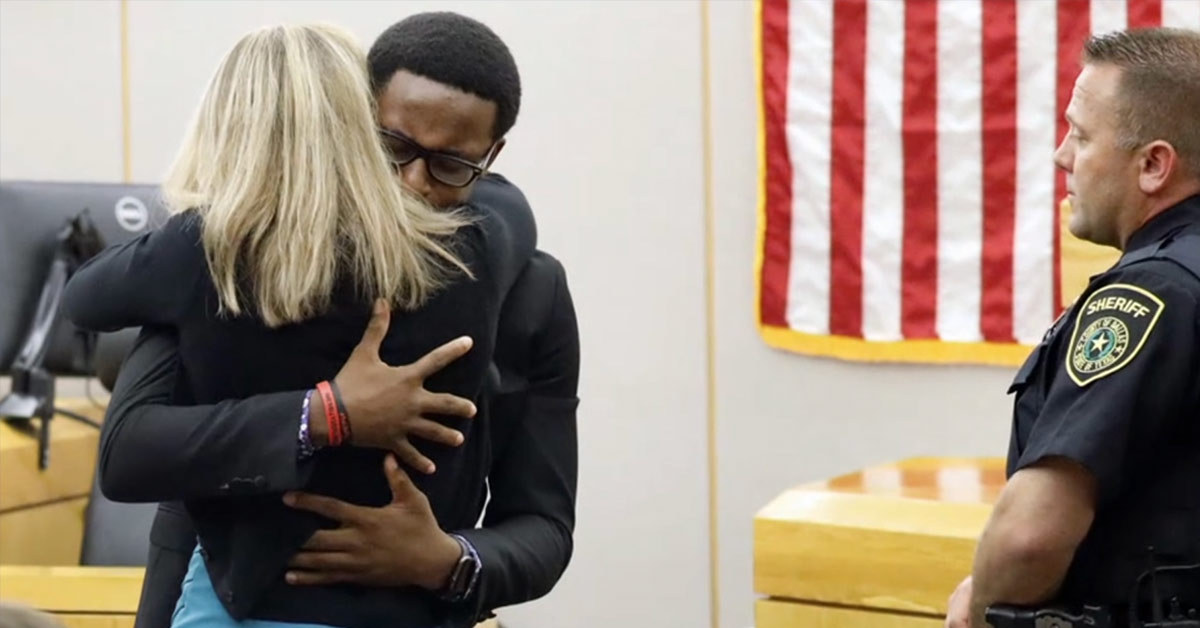 After a harrowing year of investigations and trials, ex-Dallas cop Amber Guyger has been found guilty of the murder of Botham Jean, a 26-year-old man who lived in the apartment above hers. [1] On September 26, 2018, Botham was eating ice cream and watching TV when Guyger opened the door to his apartment, which she later claimed she mistook for her own after a stressful 13-and-a-half hours of work. She claimed she thought Botham was a burglar and fired two shots into his chest, instantly killing an innocent man in his own home.

After the shooting occurred, Guyger, who had been a cop for four years, was facing about 99 years imprisonment for first-degree murder. She later pleaded self-defense, insisting that she’d felt scared and threatened and she’d asked Botham to surrender. No one knows exactly how the scene unfolded since there were no surveillance cameras in Botham’s home. Guyger was immediately dismissed from the Dallas Police department and held in custody during the trial period.

On October 2nd, 2019, the Dallas County Jury, reached a unanimous verdict that found the 31-year-old guilty of the murder of Botham Jean. Judge Tammy Kemp read the jury’s verdict out to the audience, thereby sentencing Guyger to ten years in prison. She could be eligible for parole after five years.

A pure act of forgiveness

Before she was led away to prison, Botham’s younger brother, 18-year-old Brandt Jean got a chance to address the court and Guyger. His kind words will forever warm millions of hearts around the world.

“I love you just like anyone else and I’m not going to hope you rot and die,” Brandt Jean told Guyger. “I personally want the best for you. I wasn’t going to say this in front of my family. I don’t even want you to go to jail. I want the best for you because I know that’s exactly what Botham would want for you. Give your life to Christ. I think giving your life to Christ is the best thing Botham would want for you.”

He then asked if he could hug her, and in a display of unbridled emotions, Guyger ran into his arms and broke down in tears. [2] Everyone was shocked at the selflessness coming from the young Brandt, who had been very close to his older brother.

Judge Kemp also hugged Guyger and handed her a copy of the Holy Bible.

As reported by ABC News, Dallas County District Attorney John Creuzot said that although he believes Guyger deserved a longer sentence for her reckless actions, the decision of the jury would have to be accepted. [3] He also said that in his 37 years of practicing law, no one had ever done what Brandt did that day.

“That young man is 18 and he is a leader. He should guide us in healing. I never saw anything like that. It an extraordinary act of healing and forgiveness,” Creuzot said.

The jury’s decision is unacceptable to thousands of people

Outside of the courtroom that day, dozens of people were seen protesting against the decision of the court, which they termed “unfair.”

“There is no justice for a man’s life to be taken, and she gets ten years,” a woman could be heard saying. Others could be seen carrying placards and chanting, “No justice, no peace!”

“Botham had a love for everything and everyone. His (Botham’s) privacy was violated. She intruded on him and that was not enough. She killed him. If Amber Guyger was trained not to shoot in the heart, my son would be standing here today,” she said.

Mrs. Jean said that although the death of her son has changed her and her family’s lives, she has accepted the decision of the jury and began the healing process. She calls on the Dallas Police Department to take in-depth action to ensure that no other person will have to live with the pain of losing a child for nothing.

“That 10 years in prison is for her (Guyger) to reflect and to change her life,” Allison Jean said. “But there is much more to be done by the city of Dallas. The corruption we saw during this trial must stop. The city of Dallas needs to clean up inside. The Dallas Police Department has a lot of laundry to do. The Texas Rangers need to get on board,” Alison said.

“How could we have lost Botham?”

Bertrum Jean, Botham’s father, is yet to grasp that his son will not be coming home to him anymore. He broke down in tears in the courtroom as he was questioned by LaQuita Long, the Dallas County Assistant District Attorney who represented the family.

“How could that happen to us, our family?” said Bertrum Jean, choking with tears and painful emotions. “How could we have lost Botham… such a sweet boy. He tried his best to live a good, honest life. He loved God. He loved everyone. How could this happen to him? How could it be possible? I’ll never see him again.”

Botham Jean had been a devout Christian who led a worship group at a Harding University presidential reception in Dallas. His father said he’ll miss their long, hearty conversations on Sunday.

“Sundays are not a good day for me because I’m not hearing his voice,” Bertrum said.

Guyger’s self-defense plea was rejected and overruled a day before she was sentenced to prison. [4] ADA Long pleaded with the jury to not issue a sentence lower than 28 years to Guyger. In defense, Guyger’s lawyer, Toby Shook, pleaded with the jury to temper justice with mercy, stating that the proposed sentence was meant for a person who kills for “hate, for self-gain, who does so without remorse.”

Long was having none of the sentiment. “The only reason we all sit in this courtroom today is because of her actions,” he said. “And for her actions, there must be consequences. To the defendant, he was just a silhouette in a room. To EVERYONE who knew Bo, he was the brightest light in the room.”

Guyger was immediately handed over to the Texas Department of Criminal Justice and was promptly taken to prison to begin her sentence.

Guyger’s situation was worsened by the evidence presented by her prosecutors in court, showing racist social media posts made by the ex-cop. Although several of her colleagues had testified in her favor, stating that Guyger was an incredible cop who always supported and protected everyone, those posts said otherwise. Guyger had allegedly shared several violent, racist, and harsh comments and memes on social media platforms, highly uncharacteristic of a cop who was trained to protect and defend all people equally.

She allegedly made a terrible comment in January last year when a colleague complained about crowd control at the Martin Luther King Jr. Day parade in Dallas. The exchange went as follows:

Colleague: “When does this end lol.”

Later, Guyger also wrote: “Just push them… or spray your pepper spray in that general area.”

On another day, she posted an offensive meme that read: “I wear all black to remind you not to mess with me, because I’m already dressed for your funeral,” following up it with the comment: “yah i got meh a gun a shovel an gloves if i were u back da f*** up.”

The highlight of the final trial had been young Brandt’s forgiveness of the cop. He told her that he loved her and wouldn’t wish anything bad to happen to her. He hugged her for a long time, soothing, and healing her. It was truly an amazing scene to watch.

May Botham’s soul find eternal peace and may his family find solace on earth.