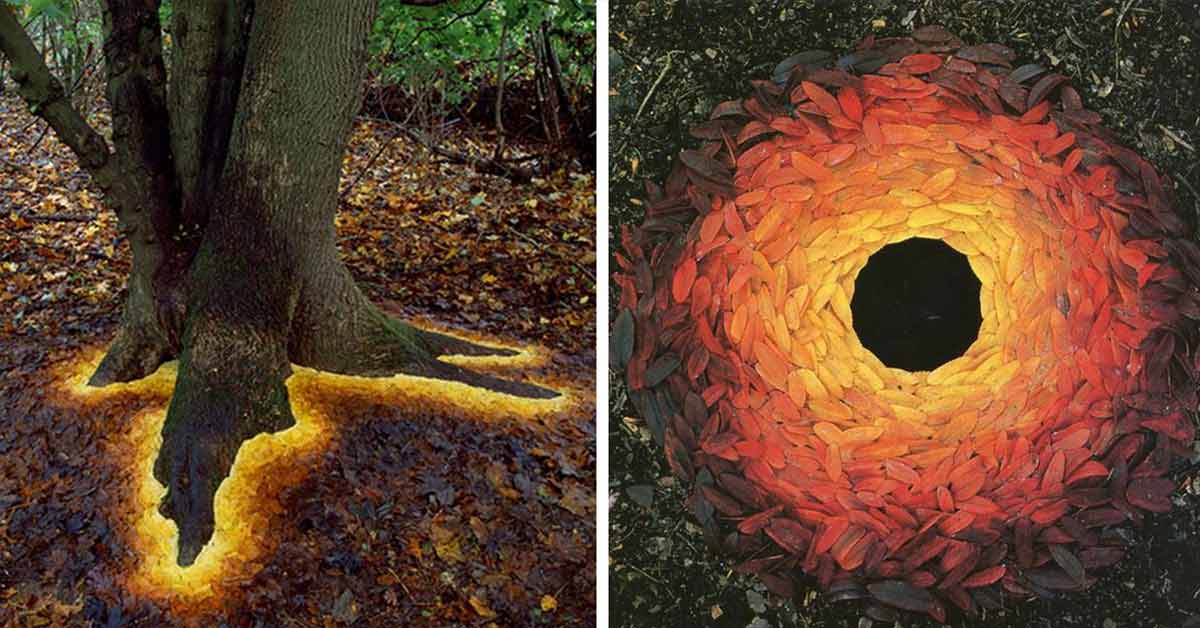 To a creator, art is everywhere, yet this particular artist is truly one with nature. He uses everything from flowers and leaves to stones and twigs to create his masterpieces. He makes artwork out of literally anything; he could stop randomly and pick up a material because he feels “there is something to be discovered.” Then, he goes on to make beauty out of nothing.

The man behind the art

Andy Goldsworthy, born July 26, 1956 in Cheshire, England, is a British sculptor, land artist, and photographer. He is known for his style of art, which is described as “ephemeral” because they tend to decay.

He grew up on a farm with his family where he worked quite a lot. He likens making art pieces to farmwork: “A lot of my work is like picking potatoes; you have to get into the rhythm of it.” Goldsworthy studied fine art at Bradford College of Art, and Preston Polytechnic where he received his bachelor of arts (B.A.) [1]

In the most basic terms, Goldsworthy creates his artworks by arranging materials he finds in nature. He makes use of his hands, teeth, and other tools to prepare the materials, which include icicles, leaves, mud, pinecones, snow, colorful flowers, stones, twigs, and thorns.

Goldsworthy said, “I think it’s incredibly brave to be working with flowers and leaves and petals. But I have to. I can’t edit the materials I work with. My remit is to work with nature as a whole.” Some of his pieces, however, involve the use of machine tools.

He makes use of repeated motifs such as snaking lines, spirals, circles, and holes. He employs these techniques because he is essentially reflecting the nature around him. His work requires great patience and flexibility. For instance, while making his ice sculpture, he would often wait for the temperature to drop. Also, his “Rain Shadow” work brought him lying on the ground before the rain started and only getting up when it stopped, to create a ‘shadow’ shaped like his body. [2]

He not only uses materials he finds outside, but he also makes use of his immediate environment and the great outdoors. The parts could be from outside his house in Scotland, the sidewalks of New York City, Glasgow, or Rio de Janeiro, or the mountain regions of France or Spain. He has made art pieces in the extreme temperatures of the North Pole. On why the North Pole is special to him, Goldsworthy said, “It belongs to no one; it is the Earth’s common, an ever-changing landscape in which whatever I make will soon disappear.”  [3]

The ephemeral nature of Goldsworthy’s work

Because Goldsworthy’s works only exist for a short time before being erased by natural processes, they are said to be ephemeral, or temporal. Goldsworthy’s work embodies a vast array of forces. Chance, decay, growth, labor, memory, materiality, temporality, and vitality create the style of his work. He believes that although his work ‘vanishes’ shortly after being made, they will remain a part of the history of that place. He believes he works ‘telepathically’ with nature. He rearranges materials in its natural forms to enhance their beauty.

Also, the decay of his artwork is integral to it. Nature will eventually decay with time. Since it is this decay that gives his work its ephemeral property, he sees the inevitable death and decay as some kind of a life cycle. That is why he has absolute respect for nature since his pieces fade right back into the land they came from. His work is seen as minimalistic, yet aesthetic. [4]

The importance of photography to Goldsworthy’s work

After painstakingly arranging stones, twigs, or leaves to create beautiful works, Goldsworthy immediately documents them by taking a photograph. “Each work grows, stays, decays — integral parts of a cycle which the photograph shows at its heights, marking the moment when the work is most alive. There is an intensity about a work at its peak that I hope is expressed in the image,” said Goldsworthy. Also, documentation via photography proves the existence of the various artworks he has created. [5]

Some of Goldsworthy’s works

The poetic beauty of seeing everyday materials carefully arranged to create beautiful pieces is represented in all of Goldsworthy’s works. Some of his pieces include “Icicle Star,” “Touching North,” “Snow and Earth,” “Wet Sand,” “Garden of Stones,” Hazy Stills,” and many others. [6]

He has received great recognition in his field. For his works, Goldsworthy has received several awards including the North West Arts award, the Yorkshire Arts awards, the Scottish Arts Council award, and several others. Also, two documentary films have been made about him, the 2001 film, Rivers and Tides, and the 2018 film, Leaning Into the Wind. He is also credited with being the father of modern rock balancing.

Another prominent practitioner of Land Art

Richard Long, regarded as one of the most influential artists of his generation, has broadened the horizon of sculpture. His work typically involves ‘taking walks.’ His long walks give rise to brilliant art. He has taken several of these walks throughout the world, in places such as the Sahara Desert, Australia, Iceland, and Bristol in the United Kingdom — his home.

Long’s works take the form of geometric shapes and are typically made with materials that are either native to his home or sourced from some of the places he has visited. With his work, he connects the viewer with everlasting elements of nature. Even his most iconic works leave minimal impact on the environment where they were made. [7]

To him, it doesn’t matter if his works are undetectable, or not understood by the viewer. He believes that what validates the simplest actions as artistic expression is the experience and intentions behind the work. And just like Goldsworthy, photography is very important in his line of work. According to him, “Even though a lot of my work takes place in the landscape, the gallery is the conduit for bringing my work into the public domain.” That is why he takes photos of all his work, so he can share with the rest of the world. [8]

Goldsworthy has certainly challenged traditional and conventional forms of art by ‘creating nature’ within nature. He has shown that art can be created anywhere, and anytime.

We don’t need special types of equipment to create wonder. We just need our imaginations, to step outside the house more often, and to open our eyes to the endless possibilities of our creative minds.