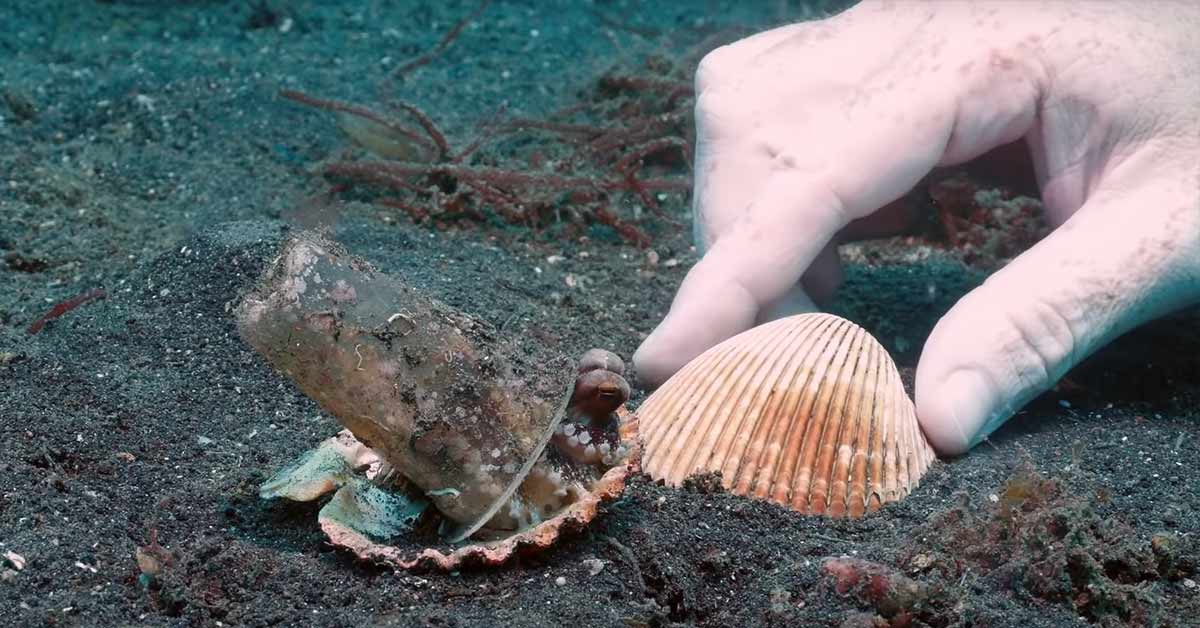 The issue of ocean pollution has worsened over the years. Conservationists have given an estimate of the waste condition in the ocean, and the figures are gut-wrenching. With trillions of plastic waste in the ocean weighing over 260,000 tons, if no positive change is made soon, the ocean might contain more waste than ocean life.

Regardless of the scary statistics, here’s a little story that shows not all hope is lost yet.

Not all heroes wear capes

Indeed they don’t; some of them wear scuba diving gear. One such hero is an engineer and scuba diver from Iceland, Pall Sigurdsson. Sigurdsson and other divers went diving in Lembeh, Indonesia. Sigurdsson who enjoys filming animals underwater came across a heartbreaking sight. On the ocean floor was a baby veined octopus who was using a plastic cup as a shell. The little fella was exposed to so much danger without even realizing it. However, Sigurdsson and his team sprung into action and began searching for the perfect shell for the baby octopus.

Sigurdsson explained the situation, saying, “This was our third dive that day, and we were all starting to get a little bit tired. My dive buddy sent me a hand signal indicating that he had found an octopus and asked me to come over for help.”

He also said it was no surprise to see an octopus in a ‘trash shell.’

“I am no stranger to seeing octopi making homes out of trash,” said Sigurdsson. “They are clever animals and use their environment to their advantage, and trash is a permanent part of their environment now. However the octopus with its soft tentacles did not know that this cup offers virtually no protection, and in a competitive environment like the ocean, this cup was a guaranteed death sentence.”

It was not an easy task

It certainly wasn’t. At first, the divers offered the baby octopus five shells, all of which he rejected after feeling each one with his tentacles. Nevertheless, the patient divers did not give up on him. They kept on searching until they found the perfect shell for him and waited until he accepted it. This they did even though they were running very low on oxygen.

Sigurdsson who understood this pickiness said, “We tried for a long time to give it shells hoping that it would trade the shell. Coconut octopus are famous for being very picky about which shells they keep so we had to try with many different shells before it found one to be acceptable.” [1]

Finally, the octopus removed the plastic cup on his back and made himself comfortable in his new space. As he was running off, he forgot the top half of his shelf, which would have left him vulnerable to predators. But the divers came to his rescue and placed the top shelf on him.

The heartwarming video which was uploaded was edited to add statements such as, “Feels much better, right? Now you are safe. Now you are protected.” The video went viral with 5.6 million views on YouTube, and thousands of comments all commending the divers for a job well done.

However, when there are no coconuts or seashells to use, the octopuses improvise and use whatever they find on the ocean bed including plastic cups and containers. Unfortunately, this is bad news for both prey and predator. This is because the plastic covers offer very little protection to the octopuses, so they are left vulnerable to predators who would eat them and their “protective” plastic covers. The predator would also be weakened by the plastic, leaving it vulnerable to much larger predators that could kill it. It truly is a vicious cycle. [3]

Plastic pollution in the ocean

When asked if he sees a lot of plastic waste underwater, Sigurdsson replied saying, “There are good days, and there are bad days depending on ocean currents. Some days, you see so much trash that it is almost impossible to film sea creatures without also including trash. I try as hard as I can to make people see the ocean when it looks its best. Once I saw a family of anemonefish living next to a corroded battery. That was heartbreaking.” [4]

Statistics show that the weight of plastic in the ocean is equivalent to that of about 57,000 blue whales. Scientists estimate that by 2050, ocean plastic will outweigh all the fish in the ocean. It certainly doesn’t help that there are five garbage patches in oceans all over the world. The largest of them all, the Great Pacific Garbage Patch, is so large that it covers an area twice the size of Texas with about 1.8 trillion pieces of trash. [5]

Sigurdsson went on to explain that, “Most trash (including plastic) sinks. Most people only talk about the parts that they can see. The part that floats, but that’s just scratching the surface of the problem. Plastic straws are a minuscule part of the problem.”

How does this pollution affect life in the ocean

Based on United Nations’ records, at least 800 species are affected by marine debris all over the world, and 80 percent of these pollutants are plastic. Fish, seabirds, turtles, and other marine creatures can get tangled in plastic debris or even ingest them. This can cause them to suffocate, starve, or even drown. Humans are not spared here since some of these plastics could decompose — even if it takes a hundred years — and end up in seafood we consume.

This goes to show that plastic pollution does not only damage the environment and health of organisms, it can also affect the economic structures of the world. [6]

While this video has shown that there are still good people out there who care about the environment, it has also shown just how terrible the situation is for animals to resort to desperate measures. Truly, it was a bittersweet scene.

Nonetheless, the war on pollution is not over. We mustn’t give up; there is a lot of work to be done, but we can get it done. Big thumbs ups to Sigurdsson and his friends for the incredible job they did.