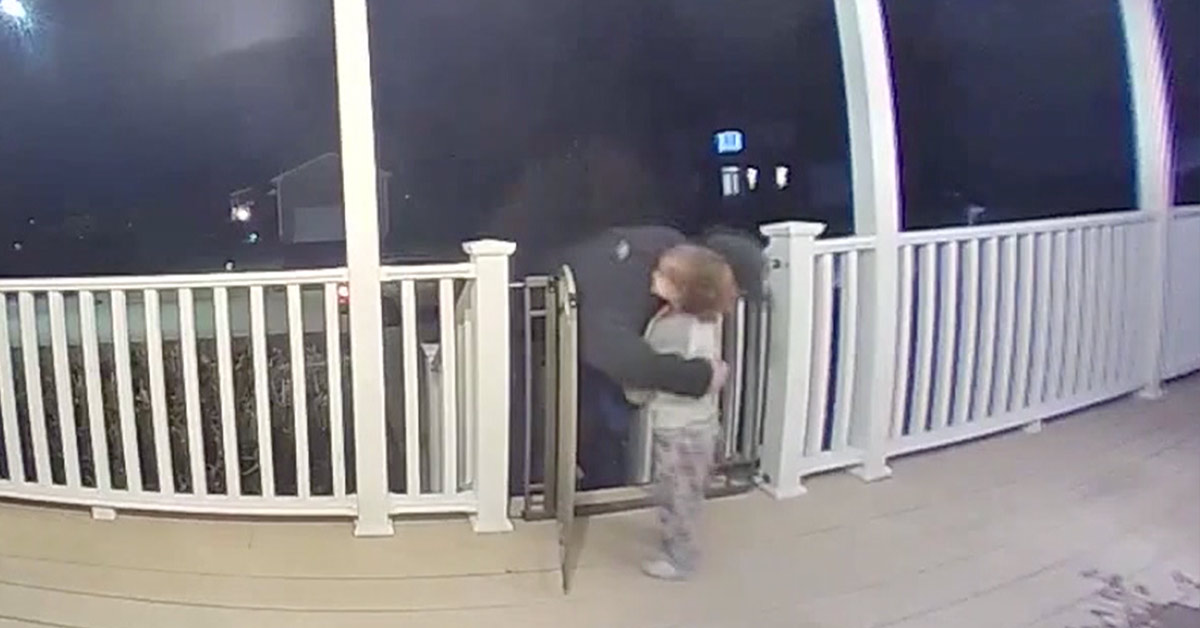 Delivering pizzas is a pretty straightforward job: take the orders and deliver the pizza. That’s about it. This pizza delivery man from Rhode Island probably thought it was just another delivery, but it became a bit more than that.

On Saturday night, a pizza delivery man for Wicked Good Pizza, Ryan Catterson, had just dropped off a pizza in West Warwick and was about to close the porch door when he got a handful of joy. Two-year-old Cohen, whose mum just bought the pizza, ran after Catterson and gave him a warm hug.

His mum, Lindsey Sheely ran after him and closed the porch door, but not before Catterson — with a big smile on his face — waved goodbye to both of them.

Good thing the camera was there, if not Sheely wouldn’t have had anything to share with the rest of the world.

She shared the video on her Instagram saying, “I put it up on my Instagram. Actually, I just put it up in my (Instagram) stories because we thought it was funny and cute.”

Through the power of social media, Catterson saw the video and he sent Sheely a message on Facebook about the video which he later shared.

Catterson was a grieving man

With the way he hugged little Cohen, and the smile on his face, you would never have guessed it, but Catterson was grieving at that moment. He lost his sixteen-year-old daughter, Alyssa, just the week before after she struggled with her mental health for quite some time.

He truly believes the kind gesture from the boy was more than him being just a little excited about pizza.

He said, “After losing my daughter this past week, it just touched me because it was like she was there, you know, and it just meant a ton to me. It truly felt like my daughter and the universe came together, and gave me a hug of support that I really needed in that moment.”  [1]

She is proud of her son for what he did, and she believes the moment was as a result of fate. She described the hug as “a little blessing from God”.

“I believe in divine appointments and know that Ryan was the one to deliver our pizza for a reason. Please keep him and his family in prayer!” she added.

Also, the fact that Cohen had never done anything like that with any other delivery person or stranger buttresses her point that it was simply a divine moment. [2]

Even Catterson’s ex-wife, Danielle McCord thought the moment was special. She was just grateful that someone was “there for him” after they lost their daughter. [3]

What does the future hold for Catterson?

For starters, he shared an important post about kids and mental health online:

“If I could tell the world one thing, it’s to make sure you check on your kids constantly, because you never know what they might be struggling with internally. We get really caught up in the fast pace of life, and I think sometimes that causes us to lose sight of what actually matters, which is mental wellbeing.”

He is hopeful other parents listen to the message and always show their kids how much they love them. Alyssa’s funeral is coming soon and the family set up a GoFundMe page for it. [4]

Catterson announced it via Facebook saying, “Trying to allow family to be together in this emotional time. We do not expect ANYTHING from anyone, but any bit of help is appreciated more than you could possibly imagine. Thank you. And please remember to hug your loved ones today if you can. For us.”

A comment from Kara Verrier Derrick read, “Sorry for your loss. I believe that was a sign of her letting you know she is happy and at peace.”

Even people who didn’t know him had kind words for him. A Nick Badger, also on FaceBook said, “Hey man, no idea who you are but I saw your go fund me, can’t even begin to imagine the pain you are feeling. Truly sorry for your loss. Shared the go fund me page as well. Stay strong brother.”

Now, why did Cohen give Catterson that hug?

We’ve already established that it was a divine moment, and might have been a sign from Alyssa to let her dad know that she’s happy. However, could there be more to it?

According to a study published in the journal Infant Behavior and Development, babies can see through that brave face you make when you are sad and can empathize with you.

Human Research Developer, Sabrina Chiarella, led the study which involved 71 babies around 18 months of age. Granted, Cohen is a couple of months past 18 months, but the principle might apply. [5]

The process of healing after a traumatic event begins with a simple embrace, this is why hugs make sad people feel much better. When you see someone grieving, be sure to offer them a hug, it’s not only beneficial to the receiver, it’s also great for you.