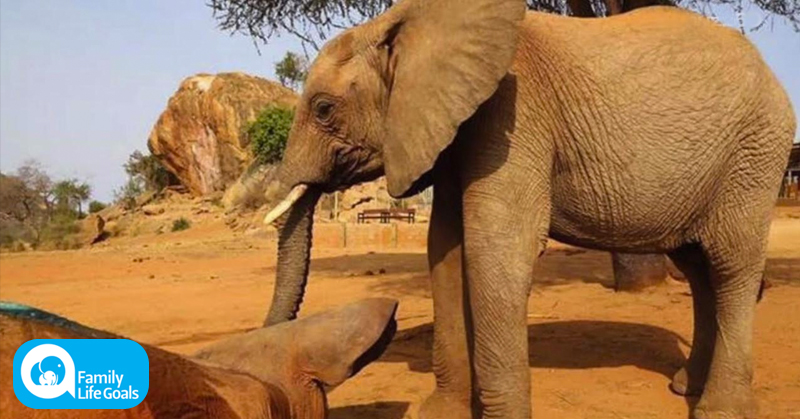 There can be no doubt that elephants are beautiful, intelligent animals. They have been shown to mourn a dead companion, care for orphaned calves and have deep bonds of friendship.

At the David Sheldrick elephant orphanage, one of the leading elephant sanctuaries on the planet, further evidence of their loving and empathetic natures has been shown after one elephant refused to leave the side of its friend after she had been shot by a poison arrow.

Maikreti, the elephant who was injured, was originally brought to the orphanage in 2010 when she was found alone in the Kenyan wilderness. After a few years of raising and rehabilitating her, the sanctuary successfully released her back into the wild to live a natural life.

#WorldElephantDay, which takes place on 12 August, is just around the corner! In the lead up to it, we're sharing our Top Seven Reasons to Love Elephants: #7 — They’ve developed their own skin care routine! Many of us panic about getting wrinkles, but elephants are born with them. While they eschew smooth skin, they do care about sun protection and slather on natural sunscreen (in the form of mud or sand). At the #DSWT, we cover the younger orphans' delicate ears with sunscreen and even shade them with an umbrella when the sun is particularly harsh! Find out how you can share your love of elephants this World Elephant Day at: ►sheldrickwildlifetrust.org/WED◄ • • • Image © David Sheldrick Wildlife Trust

However, when she was shot by an arrow in July of this year, her first instinct was to rush back home to the orphanage. As the vets began treating her, it became apparent that not only had Maikreti remembered how to get back to a safe space, but the other elephants remembered her.

The arrow that had become lodged in her side wasn’t life-threatening, but her human and elephant friends all rallied around her during treatment.

Hello, elephant style! #Suguta and #Orwa opt for a very civilized greeting while out and about at our #DSWT Ithumba Reintegration Centre. Image © David Sheldrick Wildlife Trust

One elephant, in particular, appeared particularly concerned for his friend. A young male named Kibo refused to leave her side throughout treatment. He remained out of the way while treatment was administered, hovering just over the shoulder of the carers.

As they finished their work Kibo produced a moment that will live long in the hearts and memories of the staff at David Sheldrick, when he held Maikreti’s trunk as she lay unconscious. When she didn’t get up, he began nudging her to try and wake her.

Even after the #DSWT orphans “graduate” from our care, they always know who they can turn to when they’re in trouble. Earlier this month, graduate orphan #Makireti returned to the stockades with a poisoned arrow lodged in her side. The Ithumba Keepers quickly called Dr. Poghon, who was able to remove the arrow and treat her wound. The other orphans were very concerned for their friend, and Kilabasi and Kibo stood sentry throughout the treatment. We’re not sure why poachers targeted Makireti, as she only has one small tusk. Regardless, we’re happy that she knew where to come for help and that her wounds are healing fantastically. In light of the incident, we brought in another team to monitor the area for poachers, and arrested one the very next day. We’ll continue to patrol vigilantly so that elephants like Makireti can enjoy the safe life in the wild that they deserve. Learn more about our anti-poaching work at: ►thedswt.org/antipoaching◄ • • • Image © David Sheldrick Wildlife Trust

After the anesthetic had worn off, Maikreti did eventually rise to her feet. She is now on the way to a full recovery and will be staying at the orphanage until the wound is fully healed.

A happy reunion all round and another reminder of why these wonderful animals need to be conserved!