Florida man attempts to run 1,000 miles in a water bubble from Miami to Bermuda 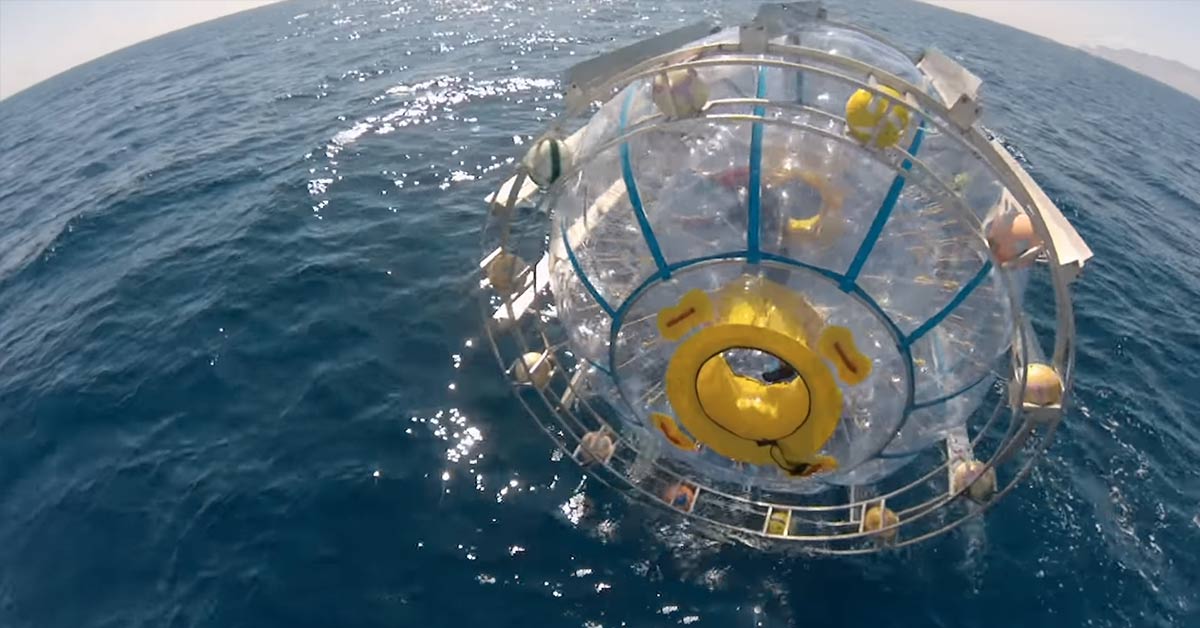 This guy takes adrenaline junkiness to a whole new level.

Reza Ray Baluchi is an Iranian world-class athlete with the wildest dreams anyone could imagine. It doesn’t get crazier than dreaming of running from Florida to Bermuda in a hamster cage bubble and actually making it happen.

Reza had been running since he was seven and it quickly became a way of life and a strong passion. He grew up on a rice farm in Iran and was required to run to and from school every day if he wanted to go at all. When he violated religious laws and ate during Ramadan, Reza was jailed, beaten, and tortured and later left for the U.S. with big dreams. He was going to be free from abuse and would finally get to do whatever he wanted in the free country.

Reza went on to become a star athlete, running for various charities and fundraisers across the country.

Apparently, he must have thought “wild and free” included running 1,051 miles on the ocean from Miami to Bermuda. [1] The 48-year-old made his attempt in a hydro pod built just like a hamster’s cage with walking rungs. Sadly for him, the water is no one’s match.

His first attempt at bubble-running the insane distance on the water had been foiled in 2014. His girlfriend Lynn had tried to talk him out of it, but it was like a thirst Reza couldn’t quench. He didn’t care if he would make it back alive. Everyone told him it was a suicide mission going lose to Bermuda, with all the terrifying stories of vessels and people that have disappeared in the area for decades.

Reza said, “I want to know what’s going on.”

Reza was retrieved after about two days on the ocean by the Coast Guard. A boater had called it in when he found Reza trapped in a boat, tired and completely lost.

“He wasn’t a sailor, didn’t know the ocean and was unequipped to do what he was attempting to do,” said Todd Coggeshall, Captain of the U.S Coast Guard (Ret.). “We wound up staying with him in the bubble for at least a full day as we tried to hash through what our authorities were.”

Reza was later taken home and given a cease-and-desist order by the Captain of the Port of Miami, and he seemed to cool down for a while. Unknown to the authorities, Reza was planning the ultimate bubble run for a charity where he wanted schoolchildren to be able to find him online.

His most recent attempt was in 2016 when he went out to the ocean fully prepared. He had two GPS trackers, two life jackets, food (energy bars), water, and even a laptop to keep him occupied. He planned to run during the day and sleep at night, and for five days, he did exactly that.

Reza’s friend George, who helped him build and roll out the bubble, spent the whole five days waiting to hear from him. George had tried to talk Reza out of his suicide mission — to no avail. When there was no communication, he began to worry that Reza might just be at the bottom of the ocean after all.

His girlfriend Lynn had been watching the GPS tracking activity on a computer and when she saw the bubble turn right, she knew something had gone wrong.

Later, the Coast Guard found him far out into the ocean. They had a direct order to terminate his voyage since his bubble had been ruled a navigational hazard. [2]

He lost everything in a few seconds

As expected, Reza refused to abort his mission and was forcefully removed from the bubble. He watched as the Coast Guard shot it to the bottom of the ocean. Over $120,000 worth of his items and expenses were gone in less than 30 minutes. They didn’t take out any of his gadgets or belongings, and no one considered that sinking a massive rubber bubble would pollute the ocean. It was out of the question to let him keep the bubble since they couldn’t risk him attempting another suicidal voyage.

Reza’s actions were ruled immoral and illegal since the Coast Guard claims response cost the taxpayers approximately $144,000. His poor judgment endangered the lives of the response team who went out into uncertain waters to rescue him. [3]

After that encounter, everyone expected that bubble-running would be out of Reza’s system. No such luck. He still hopes to complete his dream of running from Miami to Bermuda one day. At this point, no one knows what Reza has in store next.

“If people have a mission, if people have a dream, don’t listen to anybody. You do what you want to change your life, to change other people’s lives. They can make the impossible, the possible,“ Reza said.

I’m not sure how I feel about such motivational advice in Reza’s life-endangering context. Nonetheless, he believes in the American dream where anyone can be anything they want to be.