Give a wasp colored paper, it will build you a rainbow nest 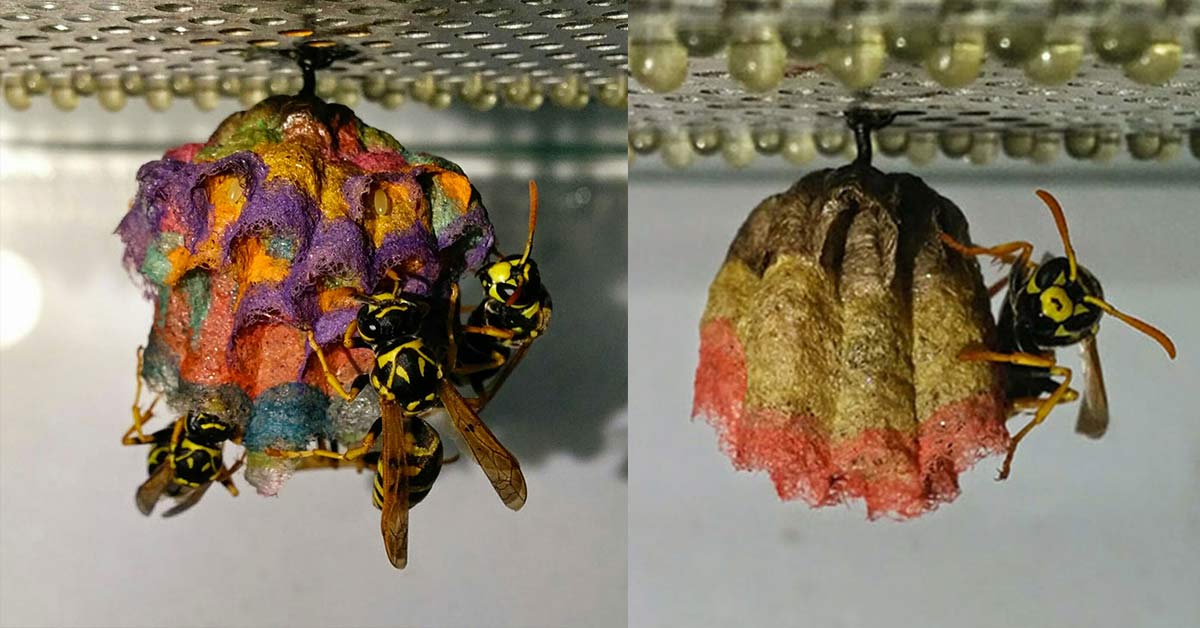 I never knew I would say this, but wasps are actually creative and intelligent — when they are not being cruel and unfriendly. I was about five when I had my first unpleasant encounter with these buzzing creatures, and the memory of a yellow-black wasp stuck in my hair is still very fresh.

Nonetheless, not all wasps torment little children. Some are quite nice if you give them a chance — or colored paper.

An Italian biological scientist based in Spain, Mattia Menchetti, discovered a unique trait in non-aggressive European paper wasps when colored paper is introduced into their colony. [1] He was studying at the University of Florence, Italy, when he conducted his research.

Menchetti discovered that these insects would work together over time to construct multi-colored nests that look something out of a hypnosis center. They’d soften the paper with fluids secreted from their bodies and use the mash to construct nests suspended from roofs or ceilings. They would intuitively blend the colors layer by layer to form beautiful kaleidoscopic structures.

Normally, there’s barely anything more cringe-triggering than the sight of a nasty wasp nest on your porch ceiling. However, it’s far less tacky and even aesthetically-pleasing if it’s colored like a nice rainbow or a multi-fruit Popsicle.

Wasps aren’t the only artistic insects in nature

When humans leave bits and pieces for insects to find, they use it in ways that can blow our minds in return. In 2012, French apiculturists were horrified when they found blue and green honey in their bees’ nests. [2] Apparently, the insects had processed colored sugar from discarded M&Ms in a nearby biogas plant. The devastated beekeepers filed a complaint to the plant because the honey was practically useless.

Insects who move in colonies such as the weaver ants, mason bees, and spinifex termites are known for using incredible metabolic mechanisms to build the most intriguing tunneled nests to lay their eggs in.

Who said bugs weren’t the smartest?

See pictures of Menchetti’s experiment below: