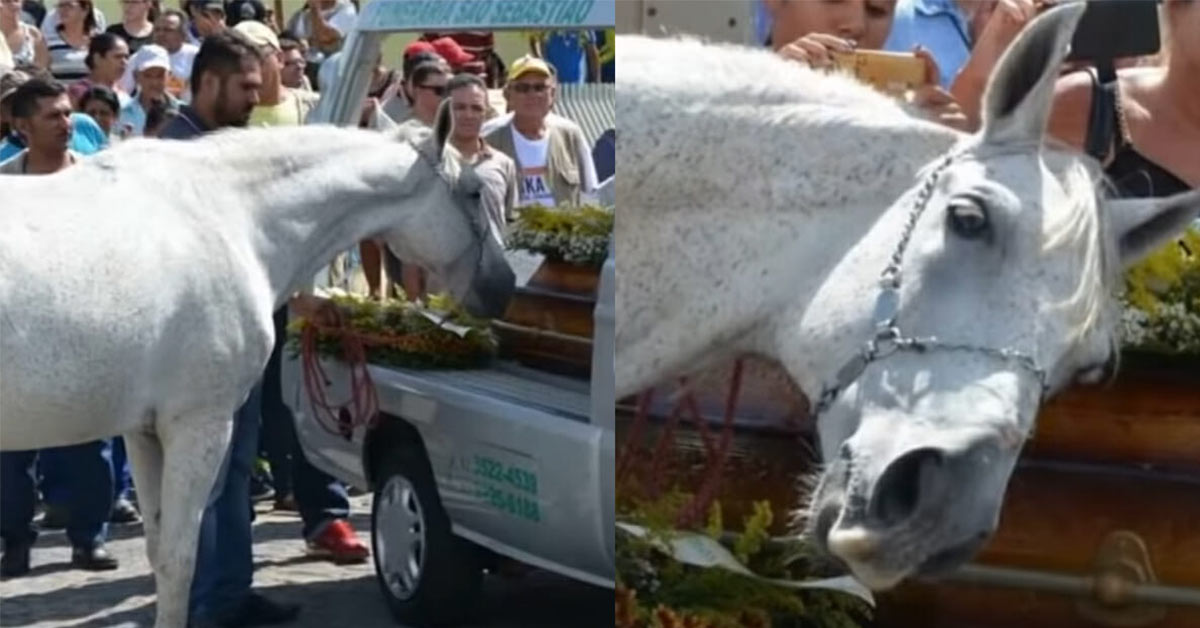 It is common knowledge that most animals including dogs, cats, and even dolphins form close attachments with humans. But few people know that horses also share a special bond with their owners and mourn for them when they’re gone.

Horses have been with us forever. Humans began domesticating them around 4000 BC and from that point on, they have been present at every stage of our evolution. They have been essential to many human societies from the ancient hunter-gatherer era to the times of the Roman empire to the advent of the engine, and even in our media today.

A little-known fact about horses is that they are unique and nearly as complex as humans. If you haven’t spent much time with horses, you may not realize that they can feel angry, sad, left out, and jealous just like people. They can forge strong bonds and become so close to their owners that they get emotional when they die. [1]

This was the case of Wagner de Lima Figueiredo, a 34-year-old Paraguayan cowboy, and his dear horse, Sereno. Figueiredo and Sereno were best friends for many years. Everyone who knew Wagner knew what his dear horse Sereno meant to him, and vice versa.

Over the years, many people had offered to buy the white stallion but Figuiereda always refused to sell him. A 2017 photo posted on Facebook a few weeks before his death shows Mr. Figueiredo with Sereno. It is captioned: “My horse and my friend.”

As a semi-professional cowboy, Figueiredo performed in rodeo shows for eight years with Sereno, winning dozens of tournaments and cash prizes.

Unfortunately, Figueiredo passed away on New Year’s Day 2017 in a motorcycle accident in Brazil. While planning the funeral, Figueiredo’s brother, Wando de Lima, knew that Sereno should be present, right alongside his human friends and family members. [2]

“This horse was everything to him,” de Lima told reporters. “It was as if the horse knew what was happening and wanted to say goodbye. All the way to the cemetery he was whimpering and stomping on the ground.”

However, what the brother didn’t count on was how much of a sensation this would cause. Sereno’s farewell has moved thousands of Brazilians who have been sharing the story on social media. During the farewell ceremony, the creature laid its head on the coffin of its cowboy owner and sighed as if it was crying. A close friend of the family, Francielio Limiera, said:

“It was an unbelievable thing to see the way the horse behaved. If I hadn’t been there, I wouldn’t have believed it myself. As we brought the coffin out at the beginning of the funeral, [Sereno] sounded like he was crying and as if he recognized that his owner was finally leaving him. He pounded the ground with his hooves and kept on whinnying. It was very sad.” [3]

“Mr. de Lima, a cowboy himself, organized the homage with other cowboys alongside Mr. Figueiredo’s family and friends. He said the “horse saw its owner’s face through a crack in the coffin and spent a long time smelling it.”

Mr. de Lima brother is now taking care of the horse, and he promises to love his brother’s horse as much as he did.

Veterinary behaviorist, Gemma Pearson lent her thoughts on the matter:

“It’s one of those things we don’t have enough evidence to really say yet, but in my opinion, innately they [horses] understand that something is wrong or something has changed. I think the challenge at the minute is it’s just not an area that anyone hugely understands.

“I think you have to give horses the benefit of the doubt and accept that there will be some sense of loss for them, and try and cope with that for them as well as you can. Be sympathetic to them and make sure the horse is happy and comfortable in other aspects of its life.” [4]

The good thing is that if horses experience grief in an almost human-like way, their owners can help them cope through the loss of a friend. Here’s how to help:

1. Allow the horse to see the body

This tip has not been verified but many horse owners agree that it does them some good akin to the human concept of ‘closure.’

As crazy as this might sound, working a grieving horse actually helps them process grief as doing familiar work can be therapeutic.

The TTouch process can help relieve not only physical pain, but also restore your horse’ sense of well-being and emotional balance. [5] You can learn more about this method here.