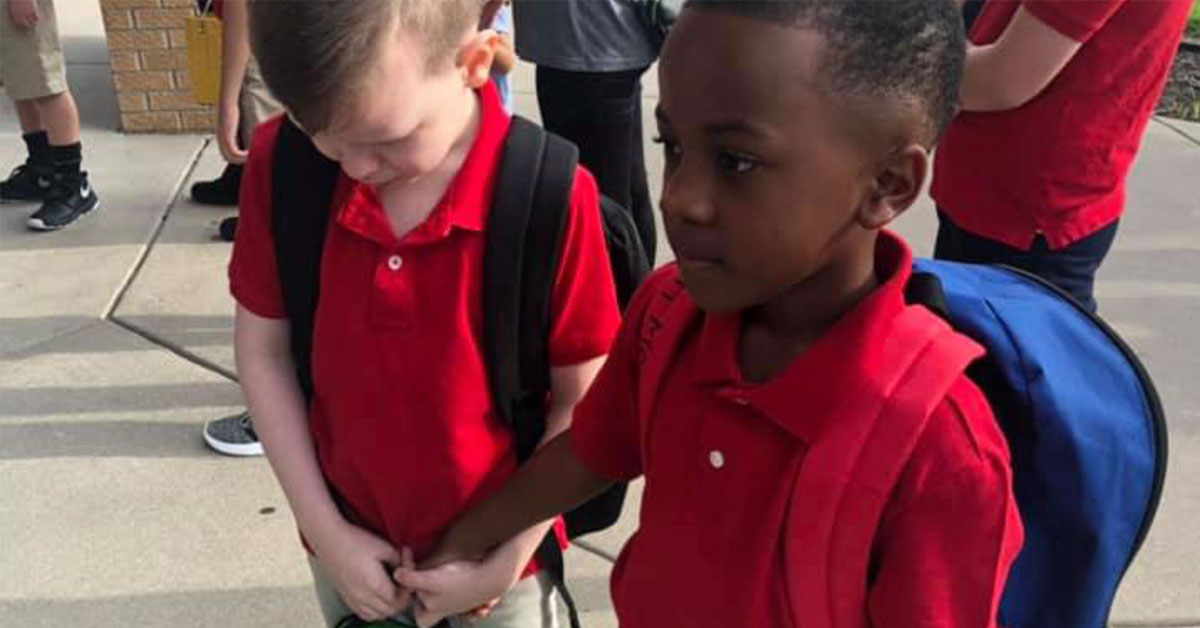 Ready for an aww moment?

Well, here’s a beautiful, awe-inspiring story where a little boy reminds us all what it means to be human. Eight-year-old Connor Crites, a child with autism, was crying in the school compound when sweet little Christian, also eight, walked up to him, held his hand, and consoled him. Connor was then able to get to class with Christian by his side still, holding his hand. According to ABC 27 News, Connor was finding it hard to adjust since it was his first day at school. [1]

The sweet encounter between the two boys took place outside of Minneha Elementary School in Wichita, Kansas. It was captured by Christian’s mom, Courtney Coco Moore. She shared the post on social media and it has since gone viral with a lot of people sharing and tweeting about it. She wrote on Facebook:

“I’m so proud of my son, he saw a kid balled up into a corner crying, so he went to console him, grabbed his hand, and walked him inside of the school! It is an honor to raise such a loving, compassionate child! He’s a kid with a big heart, the first day of school started off right.”

“Thank you so very much! That little boy he helped is my son and is autistic. I worry every day that he is going to get bullied for being different and your son just absolutely warmed my heart. If there were more children like him, I wouldn’t worry about such things.”

A Bond at First Sight

Courtney then revealed that her son Christian also has his struggles with a speech impairment and recognized that both boys are unique and special. She hoped that this singular act of kindness will foster a new friendship between them.

A lot of people have been praising Christian’s parents, saying that they’re doing a great job by teaching him to love and respect others no matter what or who they are.

This particular story pulls at my heartstrings because there are so many like it where the outcome is entirely different. These are stories where kids are being bullied by their fellow students in school for things they have no control over. It even gets worse when other parents and teachers join in on the abuse.

A few months ago, it was the case of Chloe Robert-Domolaize who has autism and had other parents at her school lobbying to have her removed from the school for being a disturbance and a distraction to their kids. [2] Many people may not understand, but having an autistic child comes with a wide range of challenges. Intolerance and bullying should not be among them, but sadly, they are. This is why little Christian’s genuine gesture was particularly nice because it challenges the typical reaction most people would have had and proves that anyone can choose to do better.

According to research by the Center for Disease Control and Prevention, one in 59 children in the United States has Autism Spectrum Disorder. [3] One in six children has a developmental disability, ranging from mild speech/language impediments to cerebral palsy.

With these statistics in mind, we should really try to do better for our kids. Bullies are not born because children have naturally so much innocence and kindness in them. Bullies are made. They learn and create these prejudices from the adults in their lives, so we have to teach them to be nice to everyone. We must set good examples for them by being kind and courteous to every person we meet, especially in their presence. After all, those mean parents that essentially bullied little Chloe might have inadvertently taught their kids that it’s okay to do such things, but it will never be.

Kudos to little Christian and Connor. I hope everyone learns from them and teaches their kids to practice kindness and love. These little acts of compassion go a long way in restoring the humanity we’ve lost in the world today.

Here’s to wishing Christian and Connor a long-lasting friendship.