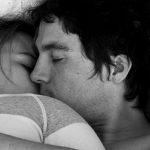 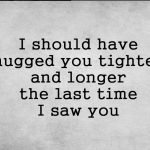 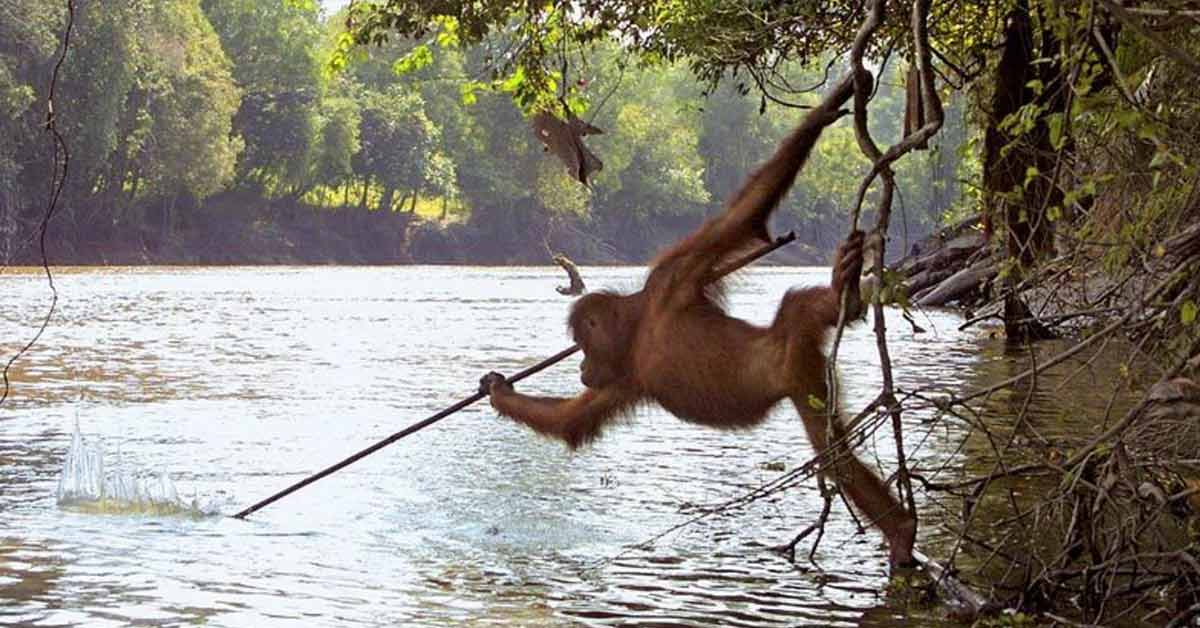 Great apes are intelligent creatures. One particular species, the orangutans, are highly intelligent primates. Also known for its unique red fur, the orangutan happens to be the largest arboreal mammal on earth. What’s more? They share 96.4% of our genes! This could account for their intelligence and perceptive nature sparks their interest in learning new things. [1]

Now, these primates are in the news for a rather unexpected reason

An orangutan at Nyaru Menteng Orangutan Rehabilitation Centre Borneo, Indonesia, was pictured attempting to catch a fish with a spear just like the fishermen do. The primate who had lost his home and family to deforestation and poachers had found the way to survive despite the odds stacked against him. He probably observed the local fisherman and attempted to do the same thing they did.

The photograph was captured and described by Gerd Schuster, coauthor of Thinkers of the Jungle: The Orangutan Report, as “A male orangutan, clinging precariously to overhanging branches, flails the water with a pole, trying desperately to spear a passing fish … The extraordinary image, a world exclusive, was taken in Borneo on the island of Kaja… This individual had seen locals fishing with spears on the Gohong River. Although the method required too much skill for him to master, he was later able to improvise by using the pole to catch fish already trapped in the locals’ fishing lines.” [2]

Orangutans have been observed making use of tools for different purposes. For instance, they have been known to use branches to search for food. They are also highly adaptive. They found a way to get to the seeds of fruit with stinging hairs by using sticks to manipulate the fruits open. They must have tried using their hands before discovering that using the tool will be a pain-free way of getting their seeds.

Also, it is almost as if they hear it when people say “Never test the depth of the water with both feet”. This is because they have been shown to gauge the depth of a river with a stick before going in. Incredible right?

Well, that isn’t even the half of it. Orangutans were originally observed using tools as far back as 1982 by Birute Mary Galdikas in the Tanjung Putting National Park.

In an interview with Science Friday, the anthropologist described orangutans as being very familiar with branches. She spoke of a time she saw a male orangutan sitting in an ironwood tree break a dead branch in half and use it to scratch his back. That was the first-ever recorded time an orangutan was observed to use a tool. She also spoke about the time she saw another orangutan use a branch to swat a wasp out of the room. [3]

Asides from the spearfishing act of the orangutan, there have been other cases where these primates proved that they have advanced intellectual capabilities. Footage from Camp Leakey at the Tanjung Puting National Park in Borneo showed an orangutan washing his clothes. This skill he probably learned from watching the humans at the camp.

Hey, if things at the park don’t work out for him, he can always get a job as a local Laundromat.

Also, human females aren’t the only ones with beauty routines. An orangutan at the Tama zoological park in Tokyo was captured using a washcloth to clean his face. He did this with surprisingly gentle motions and even wrung the excess water out.

How are they able to do all these things?

Two words: opposable thumbs. This simply refers to the ability of the thumb to move and rotate on its own without the other four fingers. Primates that have this feature include chimpanzees, bonobos, gorillas, baboons, and of course orangutans. This helps them grasp tree branches to climb or hang off, throw things, catch fish, peel fruits, and even build tools themselves.

That said, this feature, as well as their observant nature, is responsible for their ability to carry out tasks in human-like manners.

After employing numerous cognition studies, Robert Deaner, Psychologist at Grand Valley State University in Michigan, was able to figure out which non-human primate is the smartest. He found that great apes were among the smartest, with orangutans coming in second just after humans. Chimpanzees, spider monkeys, and gorillas then came in 3rd, 4th, and 5th respectively. [4]

They are also cultured exceptional problem solvers. According to Michelle Pesilets, Executive Director of the Orangutan Land Trust, orangutans are patient and will take time to figure out how to solve a problem. This is as opposed to the impatient chimps and unmotivated gorillas.

These apes are certainly a fascinating bunch. One can only imagine how much more they can evolve in a couple of years or decades. Either way, we are here for it all.