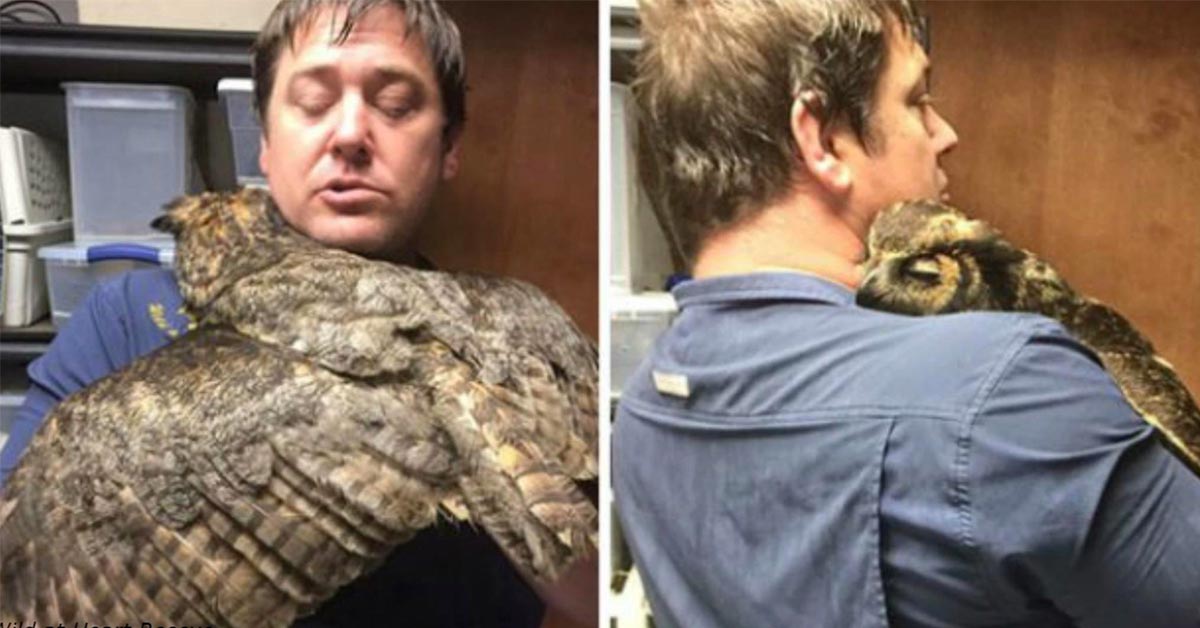 Human-animal love is a special and powerful force. We’ve come across numerous stories of friendships between man and other animals. The heartbreaking story of Hachiko — the dog who continued to visit the Hidesaburō Ueno at Shibuya Station in Japan for nine years, nine months and fifteen days after the passing of his owner — is a reminder that love isn’t restricted even by death.

Although the story of this owl is not one of death, it still proves that love doesn’t know shape or size.

She Wasn’t Expected to Live

GiGi, a great horned owl was taken to Mississippi’s Wild at Heart Rescue after suffering a head injury, which led to a massive concussion. It was suspected that she had been hit by a car. Upon further examination, they found that she was not only filled with parasites, but also suffered from aspergillosis, which is similar to pneumonia in people. It was clear at this point that she needed extensive care if she were to make it out alive. [1]

According to Missy Dubuisson, the founder, and chief of the rescue center, the great horned owl’s condition was so critical that she wasn’t expected to live.

“This bird was one of the most critical we have ever taken care of; the fact that this bird has lived is beyond comprehension,” she said.

Enter the ‘Birds of Prey Whisperer’

If there was anyone at the rescue who could help GiGi get back to good health, it definitely would be Douglas “Doug” Pojeky,  fondly referred to as the “birds of prey whisperer.” He provided the intensive care she desperately needed. [2]

During the course of her treatment, GiGi lost an entire pound of weight — which is a lot considering that great horned owls weigh between two to five pounds. But this did not deter him. He continued to believe that she would make a full recovery.

Under his care, GiGi was nursed back to health. She went from being hand-fed to grabbing food on her own.

During GiGi’s recovery period, Pojeky took a trip to Michigan, staying for a few days. The owl reportedly moped around the center during this period.

When Pojeky returned, he gave GiGi an examination, and she immediately started bobbing her head and dancing on his arm. Apparently, she recognized the man who had saved her life.

Slowly, she walked up to his chest, rested her head around his shoulder and wrapped her wings around him in a hug.

“They absolutely know him and trust him”

Dubuisson said that she has never seen someone with such a bond with birds. She added that watching Douglas with the birds makes her emotional, as they know him and trust him.

“In all my years of working with birds of prey, I have never seen someone with such a bond with these magnificent birds.

“It literally brings tears to my eyes to watch him interact with these birds. They absolutely know him and trust him. It’s the trust that you see in her face,” Dubuisson said.

And Doug admitted that the connection he had with other birds he had worked with is nothing like the one he shared with GiGi. [3]

Pojeky said being hugged by the owl held special importance to him: it reminded him of his father. He recounted the story of a great horned bird that used to perch on the top of his family’s barn. While his father saw the owl, the rest of his family rarely did. However, the owl was spotted overlooking the farmhouse on the morning of his father’s death. [4]

“For some reason, when that bird was hugging me, all I could think of was my dad,” Pojeky said.