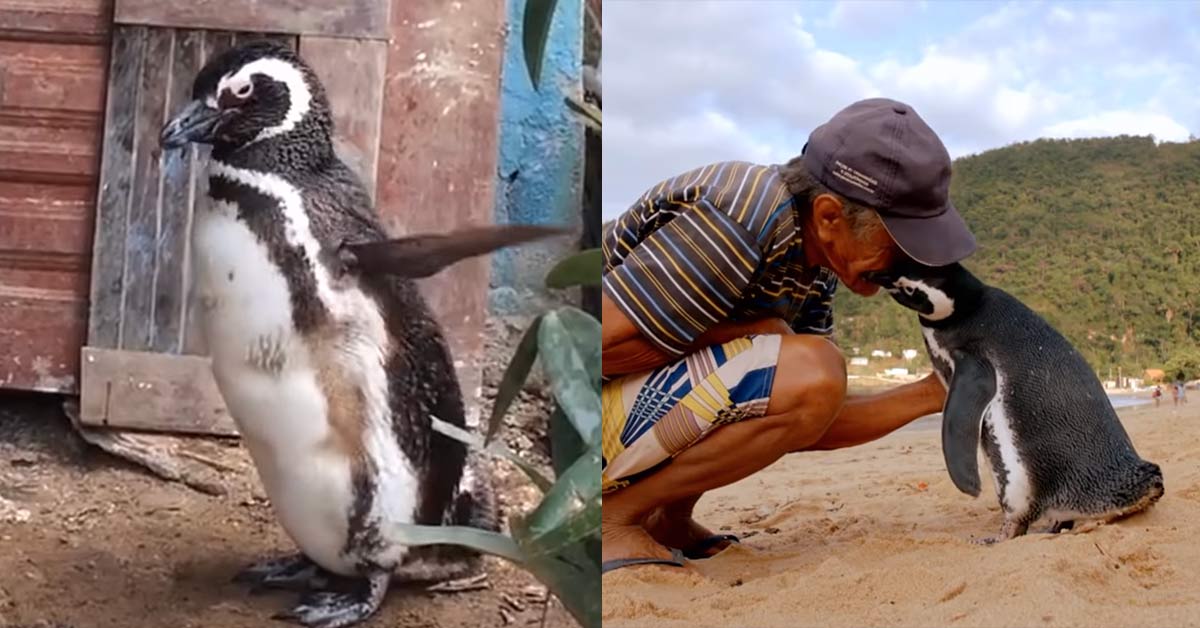 Everyone loves a grateful person. After all, you’ve done something significant for them; it is only right that they take the time to say thank you or, at the very least, acknowledge you in some way. But who said anything about gratitude being reserved for humans alone? The animal kingdom can be pretty grateful too.

What would you do for someone who saved your life? This South American Magellanic penguin thinks that coming back home to a beach in Brazil each year to reunite with his savior ought to do it.

The story behind these annual visits began in May 2011 when retired bricklayer and part-time fisherman Joao Pereira de Souza, 71, who lives in an island village just outside Rio de Janeiro, Brazil, found a tiny penguin lying on rocks on his local beach.

The penguin was far from a happy state as it had been caught in an oil spill, was covered in oil, and close to death. Joao wasted no time rescuing the penguin and cleaning the grease off his feathers. To help him build his strength, Joao fed him a daily diet of fish and named him Dindim.

A week later, Joao thought that Dindim had regained his strength enough and tried to release him back into the sea. However, the bird refused to leave and instead stayed with him for almost a full year.

“He stayed with me for 11 months, and then, just after he changed his coat with new feathers, he disappeared,” Joao recalls. [1]

Magellanic penguins are a South American penguin species that breed in coastal Patagonia, Chile, and the Falkland Islands, with some migrating as far as Brazil. They can survive in the ocean for as long as five months at a time before having to return to the coast.

Although known to have their breeding grounds just off the coast of Argentina, some Magellanic penguins have been spotted as far north as Rio de Janeiro and even further. These timid feather-shedding penguins are named after the Portuguese explorer who discovered them in 1520. [2]

During mating season, Magellanic penguins gather in numbers as high as 400,000 in huge nesting colonies along the coasts of the Falkland Islands, the south end of Chile, and Argentina. As a monogamous species, they return every year to the same mating partner.

Dindim became a regular sight in the de Souza residence until February 2012, and Joao’s grandson, who was two years old at the time, also grew attached to the penguin. In fact, his name Dindim was the toddler’s way of pronouncing the word ‘pinguim,’ the Portuguese word for penguin, and it stuck.

However, one day in late February, Dindim simply disappeared, and no one had a clue where the black and white penguin had gone off to, but months later, he returned.

“Because penguins are usually very loyal to their pair and breeding site, where they spend the summer, they tend to come back to the same place every year,” said biologist Joao Paulo Krajewski, who documented the Dindim story for a Brazilian media network in February. [3]

One day in June, Joao heard a familiar squeak coming from his backyard, and there was Dindim once again, waiting for him. This cycle has continued every year since then: the penguin would disappear in mid-February and return in late June.

Although no one has any idea where Dimdim goes whenever he disappears, the biologist says it’s extremely unlikely that he travels all the way to Patagonia.

“This is because Dindim stays in Ilha Grande (where Proveta Beach is located) at the same time all other Magellanic penguins are breeding in Patagonia and other islands down South,” said Krajewski. “When these penguins finish breeding and moulting, they migrate and spend months feeding in the sea.”

This year would make Dimdim about nine years old, and so far, the trip has been a truly unique experience for a penguin.