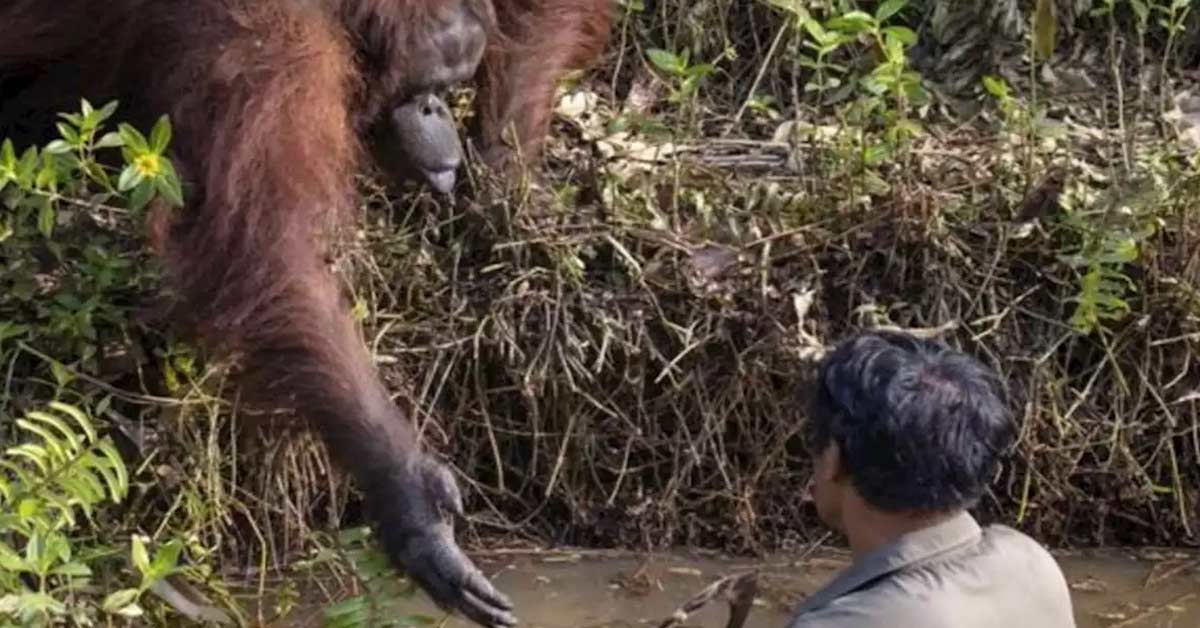 We’ve all heard several stories of humans heroically rescuing animals. In the wake of the devastating Australian bushfire, heroic humans trooped to rescue animals from the ravaging fire.  Just like humans, animals are also capable of going to extraordinary lengths to save people from danger and possibly, death. This particular story is one that touches the heart and reminds us that we are all in this together.

These fantastic pictures have captured the moment an orangutan stretched out its hand to help a man standing beneath him in a river, searching for snakes that are harmful to these animals. The orangutan, which presumably thought the man was stuck in the river, offered a helping hand. [1]

The pictures were taken by Anil Prabhakar in a conservation forest area in Borneo while he was out trekking with his friends on safari. Anil later found that the man was trying to guard the orangutan by clearing away venomous snakes.

Understandably, the man, who is a member of the Borneo Orangutan Survival Foundation, actually refused the orangutan’s hand because it is a wild animal that is certainly unpredictable.

Explaining all that transpired, Prabhakar said.

“Someone told him there was a snake in the river. The warden went there and cleared the bushes. An orangutan came to the banks and was watching what he was doing. He then came closer and gave his hand. The warden just moved away. I asked him why later and he said: ‘It’s a wild animal, not one we are familiar with.’ But they are there to protect them.” [2]

Orangutans are one of three species of great apes that are native to Malaysia and Indonesia. They can only be found in the rainforests of Sumatra and Borneo and are considered to be critically endangered. This is mainly because of the activities of poachers who engage in the illegal pet trade. Human activities have caused a severe decline in range and population, habitat destruction, etc. Because of this, several rehabilitation and conservation groups are dedicating time and effort to the protection of these endangered species, one of which is the Borneo Orangutan Survival Foundation.

Orangutans are very intelligent. Several studies conducted have determined that they are capable of performing specific tasks that require learning. For one, they can use sophisticated tools to construct sleeping nets from foliage and branches.

The Borneo Orangutan Survival Organisation is a non-profit organization founded in 1991. This organization is dedicated to the conservation of the Bornean orangutan, as well as its habitation.

“As one of our closest living relatives, orangutans are highly intelligent, sentient beings. They are an iconic species of Indonesia and an important umbrella species. By protecting orangutans in their natural habitat, a whole plethora of other flora and fauna are also protected. Protecting their forest habitat is as important to humans as much as it is to wildlife,” their website says.

This foundation is working in conjunction with international partner organizations, the Indonesian Ministry of Forestry, and local communities. Currently, the foundation has a staff strength of 400 and is taking care of over 600 orangutans.