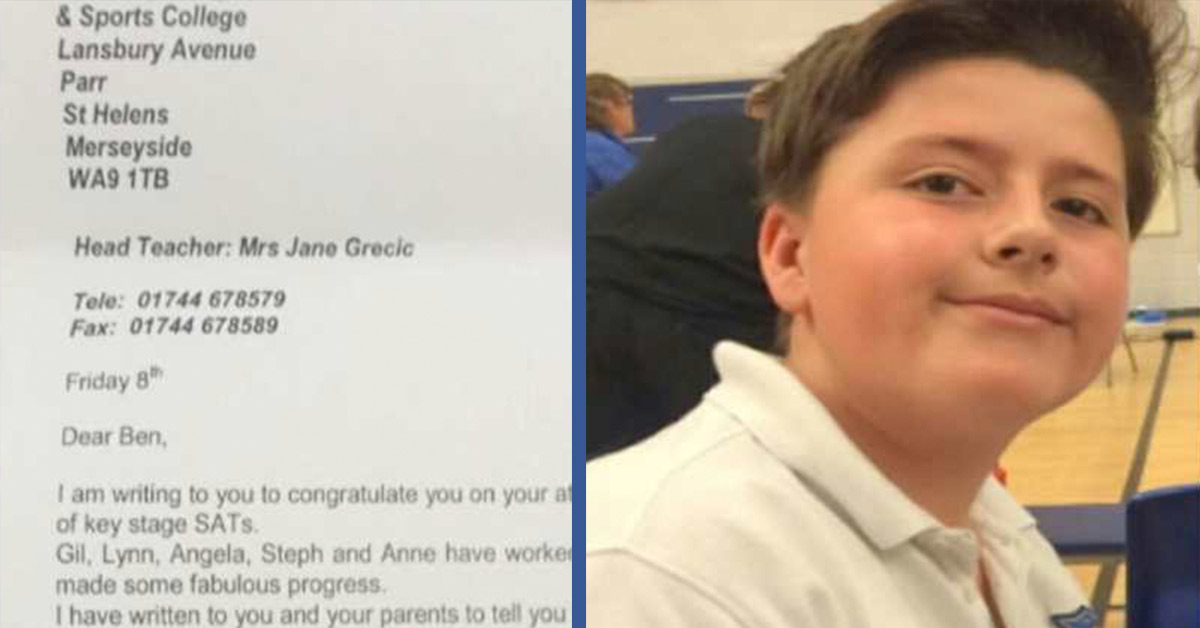 For parents who have children with special needs, life is a constant wheel of worrying about how their kids would fare in their absence, such as the hours spent at school. It’s not unusual for parents to worry that their children will be singled out, bullied, looked down on, or generally treated unkindly (by both the kids and teachers).

It’s always a relief to know that your child is being catered to – academically and emotionally. Such was the reaction of Gail Twist, the mother of an autistic boy who didn’t perform so well on his SATs in 2016. [1] Normally, SAT reports for children who didn’t make the cut would be written with a tone of criticism. It would highlight the points in the child’s academic progress, where they need to improve on and all the reasons why they are not doing well.

However, Gail was shocked at the amazing letter her son’s teacher, Mrs. Clarkson, sent him home with. The year before, 11-year-old Ben had been enrolled at the Lansbury Bridge School and Sports College in St. Helens, England, a specialist school for children with medical needs. His mother was brought to tears by the teacher’s kindness to her son and shared a photo of the letter on Facebook. It went viral in a matter of days.

Mrs. Clarkson’s letter had been more focused on Ben’s success and progress than his drawbacks with the exams. She acknowledged that his completion of the SATs was a huge success in itself.

Dear Ben,
I am writing you to congratulate you on your attitude and success in completing your end of key stage SATs.
Gil, Lynn, Angela, Steph, and Anne have worked so well with you this year and you have made some fabulous progress.

She went on to let his parents know that the SAT score didn’t define who their son was or his abilities. There was so much more to the amazing Ben Twist.  While considering the children’s progress, the school tracks and accumulates other aspects of intellectual growth.

I have written to you and your parents to tell you the results of the tests.
A very important piece of information I want you to understand is that these tests only measure a little bit of you and your abilities. They are important and you have done so well, but Ben Twist is made up of many other skills and talents that we at Lansbury Bridge see and measure in other ways.

Mrs. Clarkson went ahead to list all the amazing qualities Ben had, acknowledging that he was not only creative and athletic, but he was also communicating much better, building character, and learning empathy.

Other talents you have that these tests do not measure include: Your artistic talents, your ability to work in a team, your growing independence, your kindness, your ability to express your opinion, your abilities in sports, your ability to make and keep friends, your ability to discuss and evaluate your own progress, your design and building talents, and your musical ability.
We are so pleased that all of these different talents and abilities make you the special person you are and these are all of the things we measure to reassure us that you are always making progress and continuing to develop as a lovely, bright young man.
Well done Ben, we are very proud of you.

A foundation for greatness

Teachers like Mrs. Clarkson build the greatest minds and the most resourceful people in the world. A child doesn’t need to be talked down to or treated like he is less capable than everyone else because he has a developmental delay. She could have easily written the regular “improvements required” sort of letter, but she chose to build the boy’s confidence and encourage him to keep making all-around progress.

A bird should be judged on its ability to fly. It doesn’t have to be an amazing swimmer.