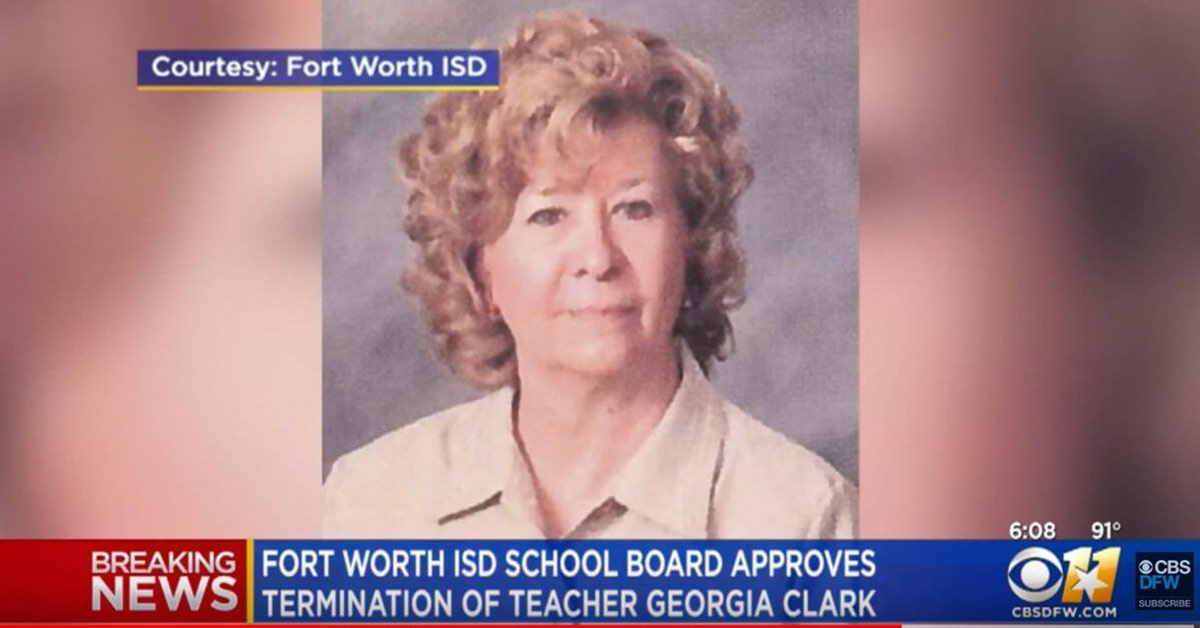 It’s the end of the line for Georgia Clark, the Fort Worth high school English teacher who tried to contact Trump over allegedly undocumented students in her school. [1]

In tweets she assumed were private on May 17, the ex-teacher explained to Trump that her school was “loaded” with illegal migrants from Mexico who were causing problems all over the place. She said that several drug dealers had been caught amongst them and nothing had been done to discipline these kids. She also stated that the assistant principal was the cause of the disorder in their school, referring to him as a “Hispanic assistant principal who protects certain students from criminal prosecution.”

According to the United States Census Bureau in 2018, 35 percent of the Fort Worth population are Hispanics or Latinos. It makes sense that their children would attend the district schools

“Anything you can do to remove the illegals from Fort Worth would be greatly appreciated,” she said in conclusion to Mr. President. Unbeknownst to her, the world could read her painful tweets. Georgia Clark showed a great dislike for her students as she hounded the president with a barrage of tweets, claiming she also needs protection from “recrimination.”

1. Georgia Clark is too cruel to be a teacher.
2. She’s also too dumb to be a teacher.
3. Sharing students’ personal info is a violation of fed law.
4. Given that this woman had already physically assaulted students, why was she still at @FortWorthISD? https://t.co/AiWG2pXlDI

The former teacher — who had 21 years under her belt — went as far as leaving two phone numbers for the president to contact her.

“I really do need a contact here in Fort Worth who should be actively investigating and removing the illegals that are in [the] public school system,” she wrote.

Later, while her case was being investigated, Clark stated that she had reported the incident to the police because she was being threatened by calls made to the numbers she ‘privately’ shared with the president.

Clark was dismissed that month and the decision was finalized in June. Fourteen members of the Fort Worth ISD Board voted unanimously to overrule her appeal and permanently dismiss her from teaching duty. No one spoke in support of her actions.

Clark also received a suspension and reassignment in 2013 from the Wester Hills High School for addressing Latino students as “Little Mexico.”

In her defense, she said, “While checking their work, I noticed that they were spending their time talking instead of working together. I decided it was time to mix the class together. When I asked them to blend in with the rest of the class, they informed me that they were fine where they were. That’s when I said we weren’t going to have Texas on one side and Little Mexico on the other side.”

Needless to say, it’s inappropriate for a teacher to profess racial differences in the classroom. It means that every child is not equal in her eyes.

For these previous events, Clark was under investigation before she made the tweets that got her dismissed from the district’s teaching service. A co-worker testified against her for making a racist comment about one of her students. Clark had allegedly said that a girl “was too busy hanging out with her black boyfriend in the afternoons to go out and sell ads” for the school yearbook. In another incident, she referred to as a student as “White Bread.”

One student was also offended when Clark allegedly called him a “blood” because of his red shoes, possibly implying that he was in a gang. Clark claimed she was only complimenting his shoes.

Clark had long been notorious for making students feel unsafe in her company with racist remarks, and her dismissal was inevitable.

The district’s address to parents and guardians

In a Facebook note addressed to the parents in the district, Superintendent Kent P. Scribner assured everyone that it was the district’s policy to keep all of the kids safe from abuse or harm.

“Our mission is to prepare ALL students for success in college, career, and community leadership. Let me reiterate our commitment that every child in the District is welcome and is to be treated with dignity and respect. As we conclude the school year this Friday, please know we take this promise very seriously and your child’s safety and well-being are always our number-one priority,” he wrote.

One follow-up comment from a supposed ex-student of the district read, “Seventeen years ago, I am still scarred by the way she treated me on my last day of middle school (Leonard). This doesn’t surprise me at all. I feel for all the POC students that have been subjected to her classes.” [3]