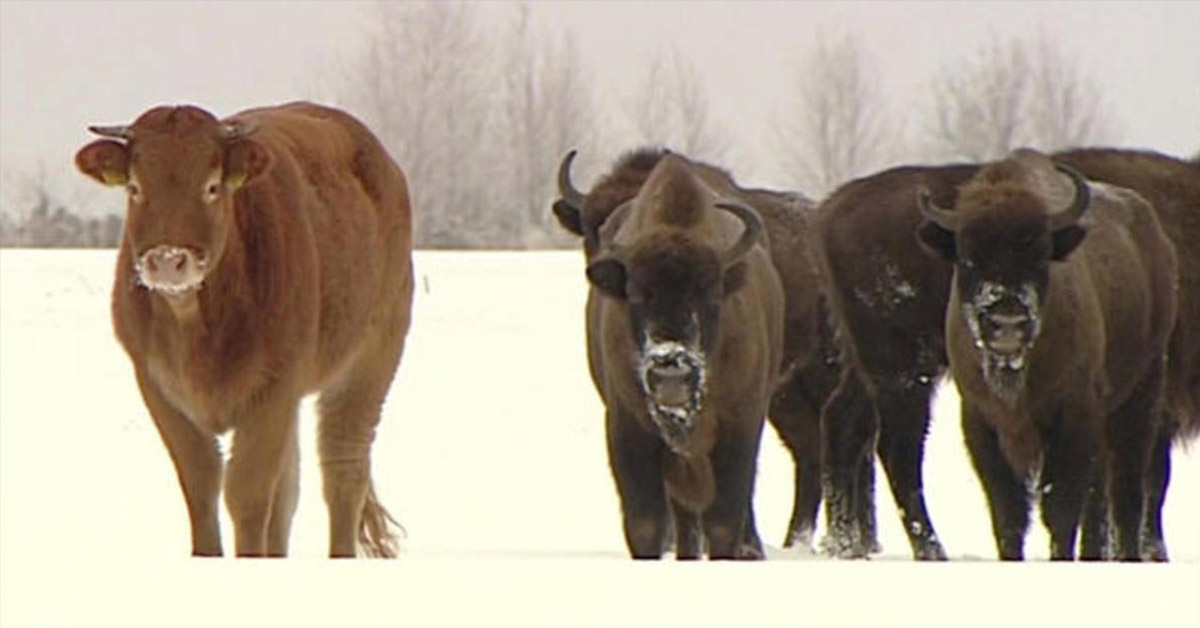 Next time you think about “walking on the wild side,” think about this cow that took those words literally and mooo-ved over to the wildlands.

Standing out in the crowd…or herd

This heifer — a cow before giving birth to a calf — left her farm the previous autumn to join a herd of bison in the Bialowieza forest of Poland, close to the border of Belarus. The runaway cow was first spotted by ornithologist Adam Zbyryt while on a bird-watching trip. [1]

His first thought when he saw the cow amongst the herd of about 50 bison was that it was some sort of mutated bison till he got a closer look with his binoculars. This was in November 2017, and he told TVN24 that “it’s not unusual to see bison near the Bialowieza Forest, but one animal caught my eye. It was a completely different light-brown shade from the rest of the herd. Bison are chestnut or brown.”

After thorough observation with his binoculars, he saw that it was a limousin cow — a breed of golden-red cattle native to the south-central part of France, but are quite popular in Poland.

The cow looked completely at peace, leading people to assume that she escaped from the farm in search of freedom. However, naturalists assumed she’d return to the farm during the winter — they were wrong. [2]

The same cow was again spotted with the bison herd by biologist Rafal Kowalczyk. This was in January, three months after the initial sighting, so she had spent and survived the winter with the herd.

Dr. Kowalczyk, director of the Mammal Research Institute at the Poland Academy of Sciences, was able to capture images of the very unusual sight. He believes her thick fur as well as the mild winter experienced in Poland contributed to her survival. Nevertheless, he admitted that the situation is an exceptional one.

The video was shared on social media and naturally it went viral with loads of comments from people who appeared to be truly happy for the cow.

What’s next for her?

Irrespective of her survival so far, no matter what she does, she will stick out like a sore thumb. Also, she appeared “not to coordinate with the group,” said Kowalski. “Bison are like one organism, she stands out.”

While she seems to be getting along fine, she might have to unfortunately return to the farm for her safety as well as that of the herd. According to Dr. Kowalczyk, “Any hybrid offspring would contaminate the world population, but there could also be a risk to the cow itself because bison calves are so large it may die giving birth.”

This contamination of the gene pool is one that has to be avoided at all costs since the bison population in Poland is already endangered.

At some point, more than 30 million bison were roaming across North America. By 1890, there were less than 1000 bison alive, placing them on the endangered species list. Fortunately, they are no longer in danger of extinction since their numbers have increased to about 350,000. [3]

Limousin cattle are believed to be among the oldest cattle breeds in the world. They are quite adaptive to several climates and can survive damp winters and hot summers. [4] Perhaps, this is why this brave cow has survived this long with the bison herd.

The relationship between cattle and bison

Bison and cattle are classified under the same genus, Bos, therefore they are cousins. There are significant differences in size, appearance, and lifestyle of these animals.

For instance, cattle do not possess the well-developed features of bison that help them adapt to short grass plains. Also, cattle often have longer legs and a straight back that is not very useful for moving through long distances. [5]

All these differences and more mean that bison and cattle living together might not be the best option available.

There is a crossbreed of both animals. This is known as a beefalo, an offspring of domestic cattle (typically male) and the American bison (typically female). This hybrid was created to produce beef that has the same characteristics of both animals.

Unfortunately, this cross breeding negatively impacts the bison population of the world as there are only four genetically unmixed American bison herds remaining.

Another cow who ran for a taste of freedom

Cows are resilient animals; they seem to know what is best for them and never shy away from going for it. This cow who joined the bison herd was said to have escaped from a farmhouse where it was probably destined to be slaughtered for meat. However, she isn’t the only cow to do that.

A cow in Poland ran away from a slaughterhouse to Lake Nysa, South Poland, after smashing a metal fence. Mr. Lucasz, the owner of the cow, tried to get it back but got a broken arm for his trouble. The cow then swam 50 meters to a nearby peninsula after firefighters tried to get her back.

The cow has survived against all odds and despite her owner considering putting her down, Czeslaw Bilobran, a political leader in Nysa, said the cow will live out her life in peace.

Politician Pawel Kukiz offered to pay for the cow not to be killed “as a reward for her attitude” and “give her a guarantee of a long-term retirement and natural death.” [6]

There are havens for farm animals who escape from slaughterhouses

One such haven is the Skylands Animal Sanctuary and Rescue in New Jersey. They take on rescued, exploited, and abused animals, and provide a safe and happy home for them.

According to their website, “no matter where they are from or from what dire circumstances they escape, they are provided with proper veterinary care, the best foods, water, a safe place to live, eat, and sleep, as well as lots of love around the clock.” [7]