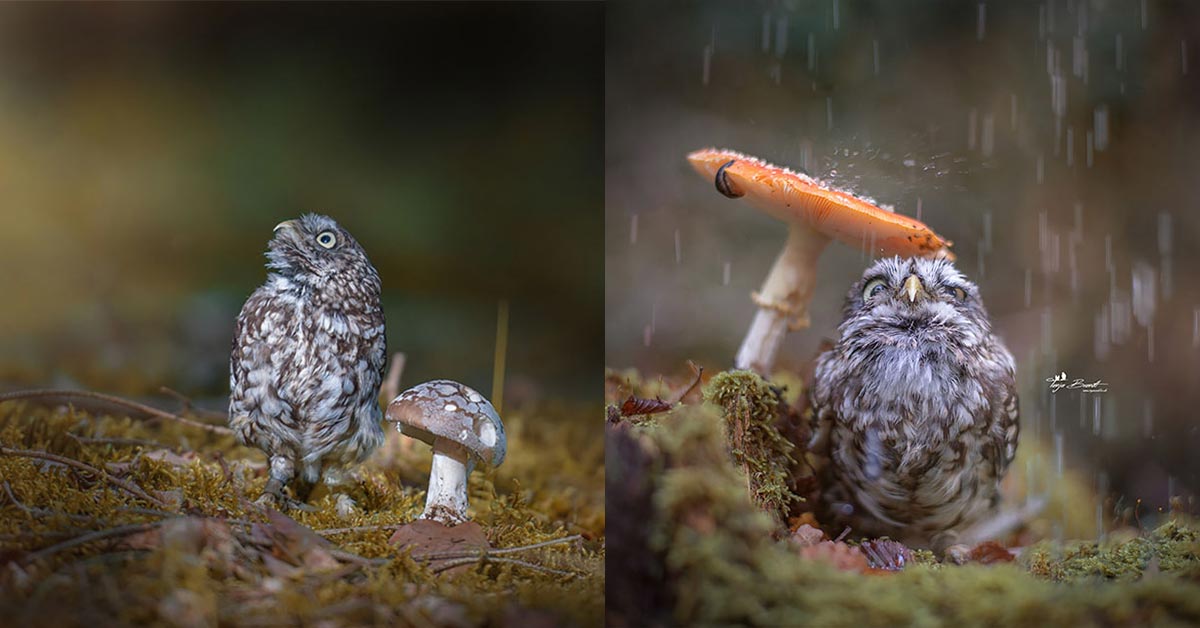 The little feather-ball even raised one eye raised as if he wanted to say, “Huh?”

Nature photography is one of the best forms of visual therapy. Giving people a chance to see things they may not have noticed ordinarily allows them to care about these things and appreciate their existence. Only the most talented minds can capture little scenes in the environment to trigger a sense of calm and peace in people.

Have you ever seen an owl so small that it can fit into the palm of your hand?

Poldi is no longer a baby, but he’s the most adorable thing you’ll see this week. The 1.5-year-old bird belongs to Tanja Brandt, a German nature photographer who loves to photograph animals in natural scenes. [1] Poldi was born in a clutch of seven eggs, and quite hilariously, he took the longest to hatch. When the cute thing came out, he turned out to be the smallest and the only male in the clutch. Well, what he doesn’t have in size, he makes up for with his adorable face.

Tanja adopted him when he was only five months old and he’s been a part of her daily life ever since. Earlier this year, she captured him under a tiny mushroom during a mild rain, a scene that hasn’t stopped melting hearts since January 2019, when it was uploaded to Facebook. [2] The photo had a touch of humor from the bird’s hilarious facial expression, with one eye raised in a confused glance.

Tanja is an animal lover who greatly enjoys the company of her furry and feathery companions. She owns three owls, one hawk, and a dog. There’s Poldi the petite owl, Ingo the Malinois Shepherd, Phoenix the Harris Hawk, Uschi the Snow-owl, and Gandalf, a white-faced owl.

“I’ve always loved animals, since I was a baby, unlike the rest of my family. When I was little, I found every sort of pet and then hid it from my parents. I love the beauty, power, loyalty, courage, and friendship of animals. Many people could learn from them,” Tanja said.

Tanja explains that Ingo is Poldi’s best friend, and while the two may seem like an unusual pair, they love each other very much.

“I never thought an owl and a dog could be best friends, but Poldi and Ingo demonstrate otherwise. The unlikely friendship is truly a beautiful thing. Since Poldi is so small, he is very vulnerable to everything around him — and Ingo has gladly taken on the role of being Poldi’s protector. They respect each other and they can read each other,” Tanja says. “[Poldi the owl] doesn’t know how to live free”.

Tanja explains that she’s always in the company of all of her loving pets, and never just one. She finds peace and calm in their company and on most days, they have a lot of fun outdoors.

“I think my animals like to be photographed. Why? Because I am always outside with my camera and with my animals. So we get to walk together, have fun, go on adventures, have little breaks… We take some pictures and after the animals can play again as we keep going,” Tanja says.

It’s amazing to see that the tiny Poldi who steals everyone’s hearts has such a loving family. See more of her work here: Tanja Brandt / Facebook