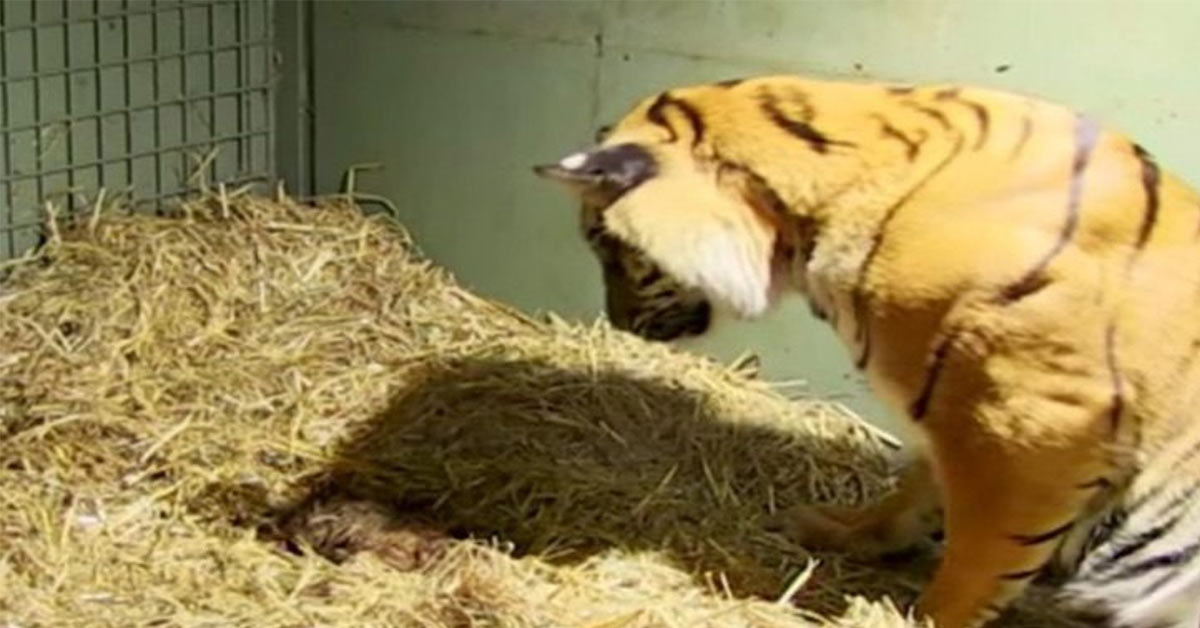 The birth of a new member of the family has always been considered a thing of joy, a moment to cherish and remember forever. Unless it doesn’t all go as planned, it becomes a moment that is best forgotten.

The concept of pregnancy and childbirth is not unique to human beings, and all births are a miracle, no matter the species. In the case of Kaitlyn, a Sumatran tiger that recently gave birth to two cubs, pregnancy can be seen as a thing of fascinating wonder.

Much Ado about Sumatran tigers

Sumatran tigers are the smallest surviving tiger subspecies in the world, distinguished by heavy black stripes on their orange coats. They are so rare that the last of the world’s Sumatran tigers — which are less than 400 today — are holding on for survival in the remaining patches of forests on the island of Sumatra.

This critically endangered species is one of the most beautiful animals in the world, but poachers continue to kill them to sell their parts in Sumatra and other parts of Asia, and their habitat is disappearing fast as humans encroach and develop the remaining land. Despite increased efforts in tiger conservation, there is a substantial market for tiger parts and products. [1]

So, when the news of Kaitlyn’s pregnancy was made public, it was a big deal, so much so that several conservationist programs carefully tracked her progress and anxiously awaited the birth of her cubs. This was important as she was a first-time mom, and they wanted to ensure her cubs entered into the world safely and were properly cared for.

“We can’t risk the Sumatran tiger going extinct like its cousins, the Bali and Javan tiger. As a first-time mother, it’s even more important for the zookeepers to watch the birth of Kaitlyn’s cubs closely. They need to be ready to jump in at a moment’s notice if something goes wrong,” the Australia Zoo keepers stated. [2]

Unfortunately, things got off to a rocky start. Her caretakers were concerned when it seemed like the first cub was struggling to breathe. Surprisingly, and most would say miraculously, Kaitlyn’s motherly instincts kicked in; she acted like an old pro and began licking the first cub immediately after he’s born.

Licking stimulated the cub’s lungs, encouraging him to start breathing on his own. She doesn’t give up. The new mother vigorously cleans her newborn until he’s able to pull in a full breath of air. The next cub comes out kicking, making much more noise than his brother. At the end of the day, the Sumatran tiger is one proud mother! [3]

Thankfully, the Australia Zoo caught the heartwarming birth on video so you can watch this incredible event for yourself, and see how this mama tiger saves her baby’s life. “The birth of these two tiger cubs brings us hope for their long-term survival,” the zookeepers said.

Animals Are Being Wiped Out by Poachers

Many wild animals are being poached on a massive scale today, with millions of individual animals from thousands of species worldwide being killed or captured in their native habitats. Poaching is defined as illegal hunting or capturing of wild animals, and this act poses a growing threat to many of the world’s animal species.

According to the World Wide Fund for Nature: “The world is dealing with an unprecedented spike in illegal wildlife trade, threatening to overturn decades of conservation gains.” For instance, ivory estimated to weigh more than 23 metric tons — a figure that represents 2,500 elephants — was seized in the thirteenth largest seizures of illegal ivory in 2011. [4]

Most poachers either catch or kill animals to sell them locally or to high paying clients all over the world. The market for wildlife trade is a major black market that is growing alongside the increasing wealth and prosperity in Asia, through the emergence of e-commerce sites and social networks.

Some animals, such as birds, reptiles, and monkeys, are caught alive so they can be kept or sold as strange pets. But slaughtered animals have a commercial value such as food, jewelry, decoration, or traditional medicine.

For example, the ivory teeth of African elephants are carved into trinkets or cut to make ornaments. The scales of the pangolin, small animals that ants eat, are ground into powder and consumed by the superstitious for their alleged healing powers. The flesh of monkeys, snakes, and other wild animals are a delicacy in some parts of Africa. [5]

Poachers do not only kill for direct profit; they may also target animals to prevent them from destroying crops or attacking livestock. This often happens to lions and elephants in Africa as well as wolves and other predators in North America and beyond.

Fortunately, there are many nonprofit organizations fighting these crimes. Some groups are providing alternative ways for poachers to make a living. Others are working on reducing the demand for endangered animal products. After all, with less demand, there’s no reason to continue killing these beautiful creatures.