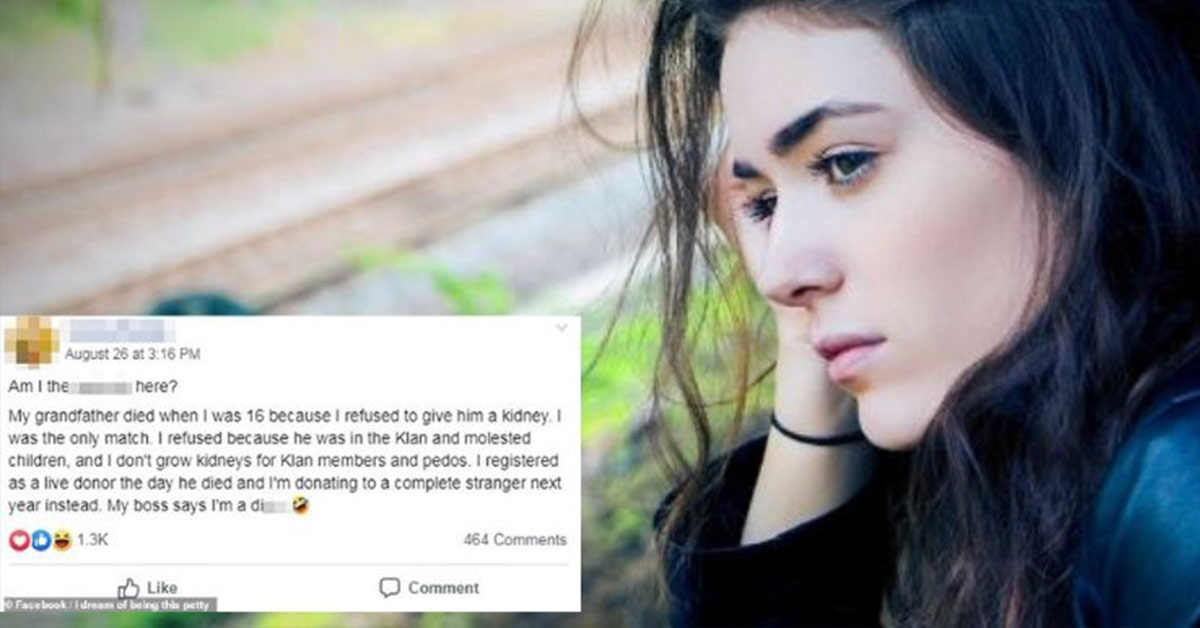 Have you ever heard the statement “the past always comes back to haunt you”? Many people believe that whatever we do today has a way of coming up in the future. This concept is also referred to as karma.

You may have heard stories or seen movies on the big screen depicting horrendous family values being passed from generation to generation along family lines. To many, however, this is a glaring reality they have to live with every day until they either accept it as a way of life or escape from the cycle.

So, what happens when a family member who causes others harm asks for a kidney transplant? The following post was shared on the Facebook group “I Dream of Being This Petty” by a member who works as a nurse.

“My grandfather died when I was 16 because I refused to give him a kidney. I was the only match. I refused because he was in the Klan and molested children, and I don’t grow kidneys for Klan members and pedos. I registered as a live donor the day he died and I’m donating to a complete stranger next year instead. My boss said I’m a di**.” [1]

This lack of remorse for choosing a total stranger over her dying grandfather has endeared the author to many people worldwide. In the post that has since gone viral, many users agreed that she had made the right decision, with the most common argument being that she alone could decide what to do with her organs.

The post has racked up more than 2500 reactions and 500 comments with most responses applauding the woman’s decision to donate her kidney to a stranger instead.

“That’s your kidney so you do whatever you want with it. You have no reason to reduce your lifespan for a bad person. I wish I had this level of courage because I’d certainly not handle people guilt-tripping me”, one user wrote. [2]

So, what would you do if you were in the same situation?

Why is the KKK Hated So Much?

The Ku Klux Klan is tagged as a Hate Organization on most international websites, including the popular Encyclopedia Britannica. The KKK was founded in 1866 by Southerners, ex-Confederate soldiers, and other disgruntled parties who were opposed to Reconstruction after the Civil War.

The Klan, as it is commonly called, initially targeted blacks, but later broadened its message of hate to include Jews, Catholics, and most foreigners. The group promoted devout patriotism and fundamentalism along with pursuing many nefarious white supremacist agendas. [3]

Few people realize that KKK actually refers to two distinct U.S. organizations. The first was founded by ex-soldiers immediately after the Civil War and lasted until the mid 1870s. The second group began operating in 1915 and has continued to today.

The 19th-century Klan began dressing in sheets and robes to frighten the then superstitious blacks and to prevent identification by the authorities. They were largely responsible for the restoration of white supremacy in Georgia, Tennessee, and North Carolina. And they went about this with excessive violence.

This forced Congress to pass the Force Act in 1870, imposing heavy penalties on terrorist organizations, and the Ku Klux Klan Act in 1871, which declared the KKK unconstitutional. This quickly made the group unappealing to members and the antiblack organization was quickly abandoned. [4]

The 20th-century Klan grew quickly as a result of publicity agents promoting romantic nostalgia for the old South. In the 1920s, the group’s membership exceeded 4,000,000 nationally. This time, however, the Klan didn’t only target blacks. They expanded their biases against Jews, foreigners, and Roman Catholics.

Does the Klan Exist Today?

Globalization and a growing racial tolerance in the U.S. have made the organization less relevant today. Asides from a few online meme wars and reports of in-fighting among members, the KKK has been largely forgotten.

The most visible Klan activities in recent times includes flyer campaigns in Pennsylvania, Maryland, and Virginia and a well-advertised September 1st rally in Madison, Indiana — which was attended by all of 12 Klan members. In fact, the most notable Klan news in 2018 was of a Klan member’s prison sentence. Otherwise, the organization is losing prominence and gaining nothing but disdain, as seen by the widespread support for the woman who refused to help a man associated with its notoriety. [5]