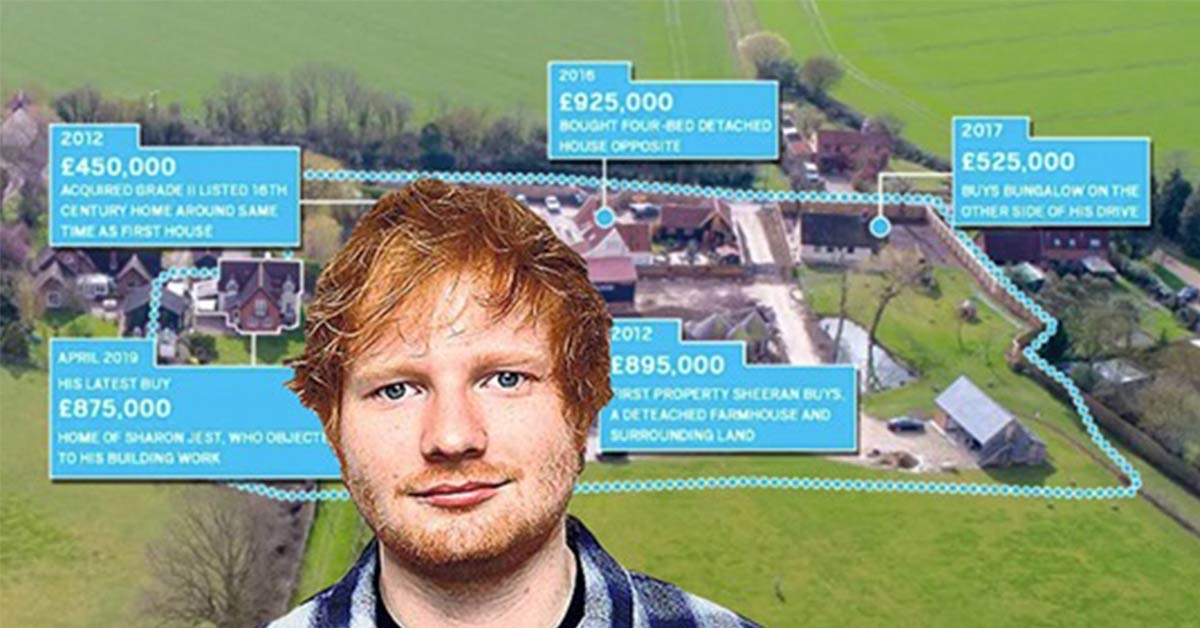 What do you do when you’re stuck with neighbors launching complaints about everything you do? You probably put up with it and hope for the best, but if you’re Ed Sheeran, you can make the problem go away by buying their houses. What’s a few million bucks when you are already a multi-millionaire? [1] Sheeran decided to buy the surrounding homes after his neighbors kept complaining about the building works he had planned.

A source told The Daily Star the house purchases came after Sheeran’s neighbors complained about the noise levels at his Sussex estate. He also acquired the flat above his recently opened Notting Hill bar.

“Ed’s had neighbors grumbling about noise before, so when he got a chance to buy up the two houses next to his London home, he jumped at the chance. Ed has not only made a wise investment, but is limiting the chance of people grumbling about loud music or parties. He also decided to buy the flat above his restaurant because that could have been a massive sticking point for the business going forward.”

Earlier this year, it was reported that Sheeran’s planning consultants had submitted an application to the local council, detailing the work to be made to the garden.

“The works involve laying new paving and composite decking around three properties, creating a kitchen garden with raised oak beds, brick paver, and gravel paths, building the brick plinth base for a greenhouse.” [3]

Sheeran also had plans to use his grounds to build a treehouse as well as a 32-ft chapel, but it didn’t sit well with his neighbors, who have voiced their displeasure.

In a letter published by the council, neighbor Sharon Jest, 59, said:

“We have no problems with the proposal but query the mention of the chapel, which has not gained permission and is most likely to be an oversight, and would also request that all external lighting is switched off between midnight and 7 am.”

Sheeran, who has a net worth estimated to be at $195 million as of 2019, had already installed a wildlife pond and a pub, but neighbors are concerned that it’s actually a swimming pool in disguise. [4]

The pond has recently been fenced off with a bunch of hay bales.

“It all seems very strange but in actual fact it appears to have been very carefully thought through. The bales have been placed precisely in the right places and at the right angle to shield his pool,” said one local.

Instead of working through dragged-out negotiations with his neighbours, Sheeran just bought them out, a solution most of us could only dream about.